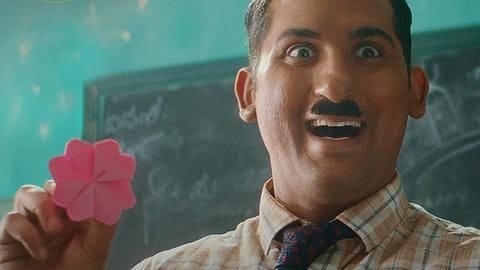 If you think about it, a hostage situation where a bunch of school kids is held by kidnappers might look like a perfect plot for an action film. But Danish Sait's upcoming drama, One Cut Two Cut, has made a laughter riot out of the plot. The trailer for the satirical drama was unveiled recently and we can't wait to watch the film!

Context
Why does the story matter?
Observation
Trailer promises a hilarious adventure of the central character

What we see in the 2:17-minute-long trailer is an art and crafts teacher Gopi's (Sait) hilarious adventure on his first day at work. He is tasked with saving the students who are taken hostage by four social media activists at the school. And, it is all the more hilarious to see the kidnappers dressed in the iconic Money Heist-style red jumpsuits and masks.

Details
Sait's role is an extension of his popular sketch

Quote
Film to address some pressing social issues as well

Talking about his character, Sait said, "Gopi as a character has received much love...from the audience and in this film, the viewers will see him landing into a hostage situation and taking on social media activists, in his own quirky and innocent style, Gopi deals with the situation while also addressing some pressing issues." Well, I, for one, am excited about the film!