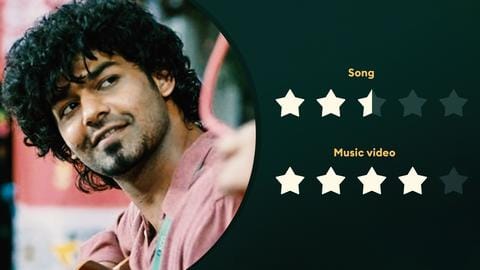 The first song of Hridayam continues to win hearts even after a couple of days of its release. Titled Darshana, the song revolves around a tender romance brewing between college mates, played by Mohanlal's son Pranav (Arun) and Darshana Rajendran (Darshana). While Arun Alat has penned the lyrics, Hesham Abdul Wahab has composed the music and crooned Darshana with Rajendran. Here's our review.

The song starts with a misogynistic statement

The song starts with the hero getting beaten up by a couple of thugs outside a college campus. However, their thrashings do not seem to bother the hero. Annoyed by his grin for every punch, one of the attackers question him why was he laughing. The hero, again laughs, and says, "Darshana is mine" - like the person in question is a commodity.

It progresses to show a decent love-at-first-sight story

Though the introductory shot was disappointing because of the message, the song progresses to a more matured romance. For example, there's this moment when Arun asks for her phone number. However, when Darshana refuses to share it, he leaves her alone and does not bother her. Another instance was when the hero agreed (with charm) when she asked for time to decide about him.

Throughout the song, what one would find appealing is the beautiful chemistry that Pranav and Rajendran shares. Their eye contact and cute romantic glances will win you over. The melodious number also highlights Pranav's style and charisma, along with Rajendran's note-worthy expressions and classy dance moves. In the 4.57-minute-long video, they both have managed to perfectly deliver a beautiful on-campus romance.

Wishing his friend and the male lead, Malayalam star Dulquer Salmaan took to his Facebook page to laud the song. He wrote, "I cannot wait to see what you've (Pranav) done in the film. Whatever I've seen from the song is WOW !!!"

Well, with the glimpses revealed, it is understood that Arun is a hopeless romantic, while Darshana is also head-over-heels in love with him, but is restrained. What challenges will they both face? We have to wait and watch. Penned and helmed by Vineeth Sreenivasan, Hridayam will hit the big screens in January. Verdict: The song bags 2.5/5 while the colorful visuals get 4/5.