Deepika on Ranveer's 'Gully Boy' teaser: You are unstoppable 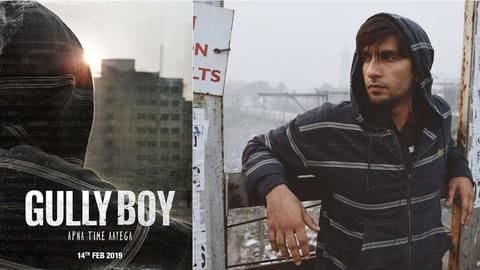 After basking in the commendable success of Simmba, Ranveer Singh is here with his next project, Gully Boy. In this Zoya Akhtar-directorial, Ranveer will play the role of a street rapper. He has shared the rather interesting teaser of the movie today, which has been well received. In fact, wife Deepika was also bowled over by Ranveer's charisma in the teaser.

The teaser
Ranveer is here to show 'asli hip-hop'

The one-and-a-half long minute teaser gives a glimpse of Ranveer's character who is here to teach the nation about asli hip-hop. He sang a rap in the teaser to express his love for music, and it was impressive. Ranveer won hearts as a rogue cop in Simmba and with Gully Boy teaser, he has proved that he will rule again.

Needless to say, Ranveer is the man of the hour. Not only is the audience showering praises on the Gully Boy teaser, but Deepika also gave it a thumbs up. The actress was in awe of hubby Ranveer. She wrote on Instagram that he has made her proud. She further quipped that Ranveer is unstoppable. Totally agree with you, Deepika.

Details
To recall, this is Ranveer and Alia's first collaboration

Gully Boy also stars Alia Bhatt in the lead role, making it her first collaboration with Ranveer. In fact, a few days back Ranveer had shared the first look of Alia's character and they make for an impressive pair. The teaser also gives a glimpse of Ranveer-Alia's steamy chemistry. Notably, the movie features Kalki Koechlin in a pivotal role.

The story
'Gully Boy' is based on rappers Divine and Naezy

Zoya's Gully Boy is based on the lives of street rappers Vivian Fernandes aka Divine and Naved Shaikh aka Naezy. They rose to fame with their song Mere Gully Mein. Talking about his journey with hip-hop, Divine said that the genre is his way of expressing himself. It will be interesting to watch Ranveer in this never-seen-before character. The movie releases on February 14.