Demi Lovato chronicles relapse in 'Dancing With the Devil' song 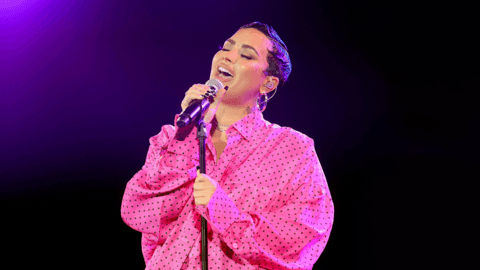 American singer-songwriter Demi Lovato has released the title track from her upcoming album Dancing with the Devil... the Art of Starting Over. The haunting new single Dancing with the Devil chronicles the near-fatal overdose suffered by the singer back in the year 2018. The new album will be out on April 2 and is going to feature 19 tracks and three bonus ones.

Overdose
She had multiple strokes and brain damage from the overdose

Also, a new four-part YouTube documentary, Demi Lovato: Dancing With the Devil, takes a good, hard look at the singer's life and the circumstances that led to her overdose. The now 28-year-old landed in the intensive care unit of a hospital after smoking heroin, possibly laced with fentanyl. She reportedly had multiple strokes, pneumonia, and brain damage from the overdose, before being revived with naloxone.

Rebellion
The singer was under pressure, not in sync with team

The singer was under a lot of pressure and felt miserable with her former team, which had imposed strict restrictions on her. She talked about feeling rebellious in her docuseries and admitted to contacting a drug dealer after downing a bottle of red wine. Her latest song's lyrics say, "It's just a little red wine, I'll be fine... I've been good, don't I deserve it?"

The Sorry Not Sorry singer also talked about being sexually violated in her bare-it-all docuseries. She said that on the night of her overdose, the drug dealer she had called earlier raped her and then "left her for dead." Her then assistant Jordan Jackson found her unconscious and called for help. "Had my assistant not come in, I wouldn't be here today," she said.

Music
Lovato is a singing sensation, rose to prominence in 2008

Lovato first appeared on Barney & Friends at the age of 10 in 2002. She rose to global prominence from the musical TV film Camp Rock released in 2008, where she played the role of Mitchie Torres, an aspiring singer alongside the Jonas Brothers. Some of her famous songs include Skyscraper, Remember December, Sorry Not Sorry, Confident, Daddy Issues, and Give Your Heart A Break.

In case you need help or know someone who does, you can reach out to the 24x7 national toll-free drug de-addiction helpline number 1800-11-0031 set up to help the victims of drug abuse. There is also a Quit Tobacco Helpline: 1800-11-2356 (Timings: 8 am to 8 pm). You can also e-register yourself on https://www.nhp.gov.in/quit-tobacco. Contact your nearest hospital in case of an emergency.