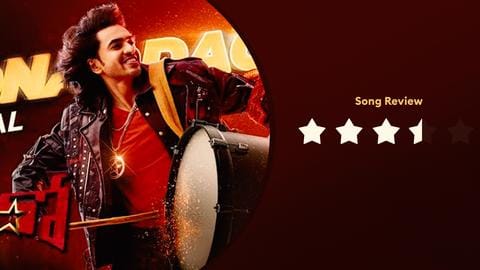 The lyrical video of Donal Daggu from Ashok Galla and Nidhhi Agerwal's upcoming Tollywood film Hero has hit the internet. Written by Roll Rida, Ghibran has composed the music. Rida has also done the vocals along with Gold Devaraj. This song is a celebration of cinema and heroes. It will pep you up easily and you'll start jiving to the beats. Here's our review.

Information
Lyrics, theme indicate this could be the intro song

The song welcomes you with a fast beat, setting the mood immediately. At that same moment, we see Galla shaking a leg. Going by the film's title and the song's theme, we think this would be the number where the hero gets introduced. Before Rida's lyrics kick in, we hear some gibberish that has worked out well for the song to take off.

Visuals
Galla's style and costume take us back in time

The high note with which the number takes flight is maintained till the very end. But Galla's style and costume arrest our attention. He is seen with straightened hair, leather jacket and leather pants— these were fashionable back in the late '90s. We don't know if this styling has anything to do with the story, but that made his moves look pretty cool!

Lyrics
Lyrics tune in with the song's overall mood

The easy lyrics go hand in hand with the song's overall dance-y vibe. There are references of stars including Chiranjeevi, Rajinikanth, and Venkatesh Daggubati, giving the song a fresh spin. Fans of these big actors will definitely enjoy those moments. Having said all of this, the number follows the same pattern of a typical groovy track and has nothing new to offer.

Donal Daggu is breezy and quite catchy. We get exactly what is expected from a song like this, but it still lacks a recall value. The rap portion stands out though. At the time of publishing, the song has received over 29L views. Comments are mostly tilting toward positive. Verdict: Donal Daggu is high on fun and entertainment. Bags 3.5 out of 5 stars.