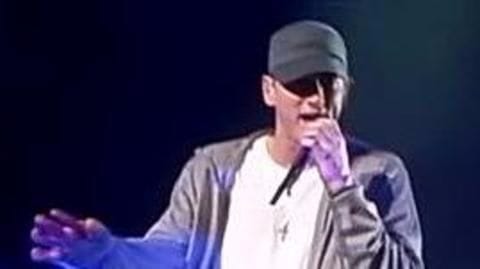 Eminem unleashed a furious four-minute attack on President Donald Trump in a rap video broadcast during the BET Hip-Hop Awards. In the track, dubbed 'The Storm,' Eminem slams Trump over his response to the violent white supremacist's rally in Charlottesville, his war of words with North Korea, his attacks on NFL players and his overall hypocrisy. Here are some of Eminem's most explosive lines.

Eminem called Trump a "kamikaze that will probably cause a nuclear holocaust," a reference to the president's escalatory statements against nuclear-armed North Korea. Eminem raps: "He says he wants to lower our taxes, then who's going to play for his extravagant trips." This could be a reference to Trump's proposed tax cuts and his frequent trips to his golf resorts, sponsored by taxpayers.

Quote
Eminem slams Trump over his inability to accept criticism

"That's why he wants us to disband cause he cannot withstand the fact we're not afraid of Trump. Walking on egg shells, I came to stomp. That's why he keeps screaming, 'Drain the swamp,' cause he's in quicksand."

"But this is his form of distraction, plus he gets an enormous reaction when he attacks the NFL, so we focus on that instead of talking Puerto Rico or gun reform for Nevada." Here, Eminem slams Trump for attacking and abusing NFL players protesting during the national anthem rather than focusing on hurricane-hit Puerto Rico and gun reform following the Las Vegas attacks.

On Military
Eminem calls out Trump's disrespect for the military

"He says you're spitting in the face of vets who fought for us you b-------, Unless you're a POW who's tortured ... cause to him you're zero…" Eminem calls out Trump's hypocrisy for accusing protesting NFL players of disrespecting the military. Eminem refers to Trump's questioning whether Senator John McCain was a war hero because he was a prisoner of war in Vietnam.

"Racism's the only Thing he's (Trump) Fantastic 4 cause that's how he gets his rock off, he's orange." Here, Eminem refers to The Thing, the rock-like character from comic book Fantastic 4. Eminem also throws his support behind NFL player player Colin Kaepernick who first started the "take a knee" protests. Kaepernick responded, tweeting he 'appreciated' Eminem.

"Any fan of mine who's a supporter of his, I'm drawing in the sand a line, you're either for or against, and if you can't decide who you like more and you're split on who you should stand beside, I'll do it for it for you with this. F**k you." Notably, Eminem had previously slammed Trump in the nine-minute 2016 freestyle "Campaign Speech."