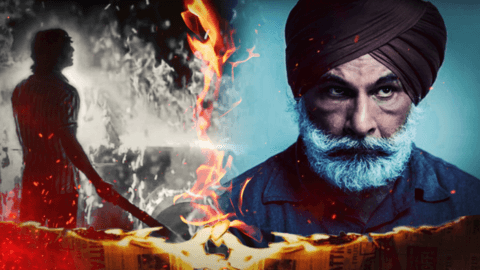 Wounds of the riots and mass killings of the Sikh population in 1984 after the assassination of then Prime Minister Indira Gandhi are still fresh in our memories. The new upcoming series Grahan from Disney+ Hotstar will be basing its premise on this dark chapter from India's history. The official trailer was recently released, which looks intense, dark and bears many layers.

Trailer
A daughter discovers her father's dark (murderous) past

The series is inspired by the bestselling novel Chaurasi, written by Satya Vyas. It tells the story of a police officer, who has been made a part of Special Investigation Teams to investigate cold cases from the riots in Bokaro. Things take a dark turn when she senses that her father might be involved in the bloodshed, and she has to pursue that truth.

Details
The trailer looks suspenseful, has many layers; evokes interest

The trailer is fast paced and acting by the central characters, including Zoya Hussain and Pavan Malhotra, is a treat to watch. It also makes clear that though the riots and its aftermath remain at the center, romance, suspense and action will also be covered. Two worlds set apart by 30 years, with many truths hidden, will surely make for a great binge watch.

Series
The 8-part series will debut on June 24

The eight-part series will premiere on Hotstar on June 24. It also stars Anshuman Pushkar, Wamiqa Gabbi, Teekam Joshi and Sahidur Rahman in other pivotal roles. Grahan has been directed by Ranjan Chandel, and has Shailendra Jha as the showrunner. About the show, Malhotra said, "An innocent love story, a complex web of emotions, but most importantly Grahan is the search for the truth."

Upcoming
Disney+ Hotstar has many exciting releases lined up

Disney+ Hotstar has a decorated list of new releases scheduled for this month. The six-episode Marvel series Loki debuted on June 9 on the platform, and will release new ones every Wednesday. Kirti Kulhari-starrer Shaadisthan premieres on the streamer today in the evening. Bhoot Police, starring Saif Ali Khan, Yami Gautam and others, will also open on the platform in September.