Home / News / Entertainment News / 'Lala Bheemla' review: It is Pawan Kalyan through and through
Entertainment

'Lala Bheemla' review: It is Pawan Kalyan through and through 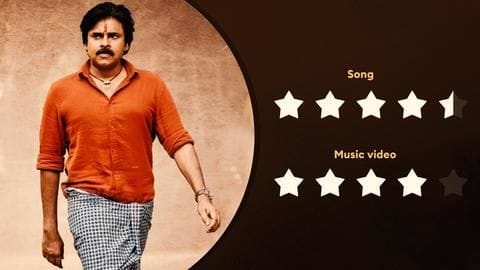 On the birthday of screenwriter-director Trivikram Srinivas, fans of Pawan Kalyan were treated with a huge surprise: The Lala Bheemla song from their upcoming collaboration, Bheemla Nayak. Penned by Srinivas, the foot-tapping number, which is is 2:29 minutes long, is high on energy and mass-appealing elements. The Telugu action film has been directed by Saagar K Chandra. Here's our verdict of the song.

Visuals do justice to the original film, 'Ayyappanum Koshiyum'

Bheemla Nayak is the official Telugu remake of the Malayalam film Ayyappanum Koshiyum. The Sachy directorial featured Prithviraj Sukumaran and Biju Menon. If you look at the visuals in Lala Bheemla, you can say confidently that the remake won't be a disappointing one. Power Star's massy appeal and the song's energy are already giving us that adrenaline rush one gets from watching Kalyan's films.

Arun Kaundinya has lent his voice for the S Thaman-musical

The song's tune is the same as Ayyappanum Koshiyum's popular song Adakachakko. It can be expected that just like that song, Lala Bheemla will also be played during the high-points of Bheemla Nayak. Arun Kaundinya has lent his voice, while S Thaman has composed its music. Naming it The Sound of Bheemla, the makers released a promo three days before releasing the lyrical video.

Visuals show us glimpses of the film's making

While the first half of the song focused only on the Power Star, the second half got a stylish entry from Rana Daggubati. Apart from a few stills from the film, the lyrical also showed glimpses of its making and clips of the original song. Kalyan was seen in two avatars - one as a cop, and the other as the lungi-clad ruthless man.

Overall, the song bags 4.5 for the energetic music

Verdict: The enthralling music bags 4.5, while visuals get 4. Bheemla Nayak is slated to be released on January 12, 2022, ahead of Sankranthi. However, reports suggest that makers may consider releasing it on a different date as was done by the team of Mahesh Babu's Sarkaru Vaari Paata. Radhe Shyam and Chiranjeevi's Acharya are still releasing on January 14, and February 4, respectively.

Moto Edge 30 Pro tipped to be launched by April

These MG Motor cars have become costlier in India

In making since years, Rana Daggubati's '1945' finally getting released