'Being the Ricardos': Catch Nicole Kidman's look as Lucille Ball 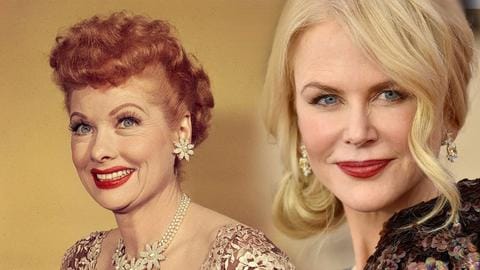 Oscar winner Nicole Kidman appeared as the legendary comedienne Lucille Ball in Being the Ricardos trailer. But director Aaron Sorkin has interestingly kept Kidman's look as Ball quite well hidden even in the trailer. The story will follow Ball and her husband Desi Arnaz's (Javier Bardem) complicated personal and professional relationship during the production of their famous sitcom I Love Lucy. Here's a breakdown.

Do you know?
Know who were the Ricardos in real life

Ball and Arnaz were famous television personalities who got married in 1940 and then starred in their hit sitcom I Love Lucy from 1951 to 1957. Although they championed over difficulties and issues during the show's run, the couple divorced in 1960.

While Ball is remembered for the great laughs that she delivered, Kidman's voice is serious and contemplative in the clip. With visuals of writer's room discussion, production studio, and soundstage in the background, Kidman's Ball recounts how she is "the biggest asset in the portfolio of the Columbia Broadcasting System" and how she's "paid a fortune to do exactly what I love doing."

But such a magnificent life cannot be without obstructions as a newspaper headline "Does Desi Really Love Lucy?" flashes on the screen. Sorkin told EW how his film will chronicle five days in the couple's life in September 1952 as they try to stage a new episode, called Fred and Ethel Fight, in their sitcom amid publicized romantic and legal troubles.

Information
It will premiere on Amazon Prime Video on December 21

Apart from Bardem's super short glimpses, the teaser trailer features JK Simmons as William Frawley and Nina Arianda as Vivian Vance, who played Ricardos's married friends on the production of I Love Lucy. The film that has been six years in the making will finally hit the theaters on December 10 and come to Amazon Prime Video on December 21, 2021.

"The only thing better than a story people don't know is a story that people think they know but they're wrong," Sorkin commented on his project. He also said the film will have four musical numbers, although specifying the tracks will be "organically" included into the script, when the story demands it and "not [like] La La Land. It's rehearsals for Too Many Girls."