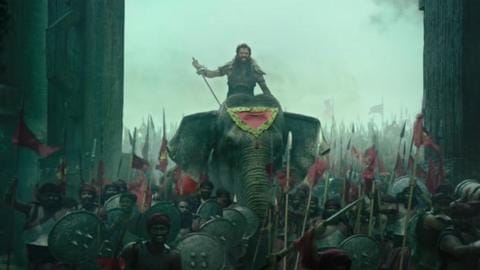 Following a long wait, the makers of Mani Ratnam's upcoming film Ponniyin Selvan I have dropped the first teaser of the film featuring all the lead actors. The extravagant visuals along with the intense background music of AR Rahman amp up the excitement of fans who have been waiting to catch a glimpse of the film. Here's more about the teaser.

Context
Why does this story matter?
Teaser
What did the teaser show?

The 1:20-minute-long teaser is a video montage of different shots from the film, giving us a sneak peek into all the important characters. The visuals of Vikram, 'Jayam' Ravi, and Karthi from the war front are adrenaline-pumping and Vikram's dialog delivery is fierce. But Aishwarya Rai Bachchan and Trisha Krishnan's face-off steals the show, though it came for a brief, blink-and-miss moment.

A short glimpse of Jayaram as Azhwarkadiyan Nambi was shown and it looks like the actor will do justice to the role and bring out the quirk and wit that it requires. Other actors including Sarath Kumar as Pazhuvettarayar, Prakash Raj as Sundara Chola, and Aishwarya Lekshmi's look as Poonguzhali are regal. Their looks sit perfectly well with the roles they will be playing.

Details
Film to hit the big screens on September 30

The teaser was released in languages including Tamil, Telugu, Malayalam, Kannada, and Hindi by Suriya, Mahesh Babu, Mohanlal, Rakshit Shetty, and Amitabh Bachchan, respectively. The first part will hit the marquee on September 30. Ponniyin Selvan is based on the Tamil novel of the same name by author Kalki. It will be a fictional story based on true events surrounding the Chola kingdom.