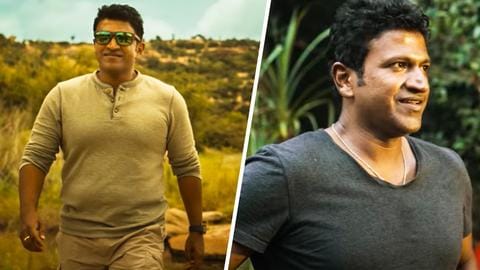 Makers dropped the title teaser for Gandhada Gudi today, the dream project of late Sandalwood actor Puneeth Rajkumar. Alongside announcing the title, the clip revealed the full-length film will hit the theaters next year. The short video teased the actor exploring varied displays of flora and fauna in Karnataka. It was dropped today to mark Rajkumar's mother Parvathamma Rajkumar's birth anniversary. Here's a breakdown.

Context
Why does it matter?
Rememberance
Even now, thousands throng the actor's memorial in Bengaluru

But people's favorite Appu passed away on October 29 after suffering a cardiac arrest, sending shockwaves across the nation. It was recently reported that thousands of the actor's admirers thronged his memorial daily. His mortal remains have been kept near his parents' burial spots at Kanteerava Studios, Bengaluru. Apart from charming viewers with his acting, Rajkumar was also known for his extensive philanthropic work.

Now coming to the exciting 1:20-minute-long clip, the teaser begins with a "based on true events" disclaimer, immediately followed by aerial shots of scenic lands and close-up shots of various wild animals. We see Rajkumar making his way through dense forests, blue waters, and farms. B Ajaneesh Loknath's music creates a sense of thrill in you and the cinematography by Pratheek Shetty is top-notch.

Appu’s dream, an incredible journey, a celebration of our land and it's legend. It's time for the return - "Gandhada Gudi"

Directed by filmmaker and wildlife photographer, Amoghavarsha, the project seems to be an engrossing visual extravaganza and we're glad it will come out in cinema halls. The late star's wife, Ashwini Puneeth Rajkumar, is the producer. Earlier reports had suggested Rajkumar might choose Gandhada Gudi or Ondu Muttina Kathe as the title. Notably, both are names of classic films of his father, Dr. Rajkumar.