'Tanhaji: The Unsung Warrior' trailer is powerful and promising 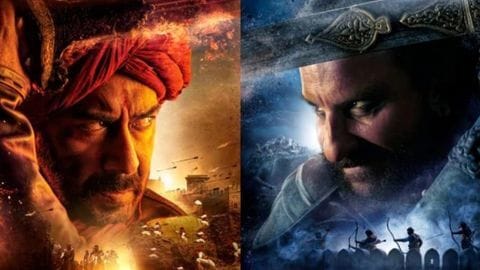 Just two weeks after the trailer of Ashutosh Gowarikar's upcoming historical war drama Panipat was heavily bashed for poor acting (looking at you, Arjun Kapoor), and its "similarities" to old Bhansali films, the trailer of another movie of same genre, Tanhaji: The Unsung Warrior has dropped. But the good 'newwz' is that this one looks pretty powerful and promising. Here, we dissect it.

Cast
Ajay, Kajol, and Saif in one movie? We are sold!

Facts
'Tanhaji' will be the 100th film of Ajay's career

Interestingly, Tanhaji will mark some of the most anticipated onscreen collaborations. It will bring together real-life couple Ajay and Kajol on the silver screen, after almost a decade. Their last onscreen pairing was in Toonpur Ka Super Hero (2010). Further, Ajay and Saif will re-unite after 13 years. They were last seen together in Vishal Bhardwaj's Omkara (2006). It is also Ajay's 100th film.

Plot
'Tanhaji' is set during the 17th-century, Mughal-era India

Set during the late 17th century, Tanhaji: The Unsung Warrior is based on the real-life battle between Tanaji Malusare, a trusted military leader in the army of Chhatrapati Shivaji Maharaj, and Uday Bhan, who served Mughal emperor Aurangzeb, in a quest to win the Kondhana territory. The trailer hints at several epic war battle scenes, and some spectacular performances from the lead lot.

Offering power-packed action sequences and some intense performances (take a bow, Ajay and Saif!), Tanhaji looks powerful and promising. Helmed by Om Raut and bankrolled by Ajay Devgn FFilms and T-Series, the movie is set to hit the theaters on January 10, 2020. Notably, it will clash with Meghna Gulzar's biographical drama, Chhapaak, starring Deepika Padukone and Vikrant Massey.