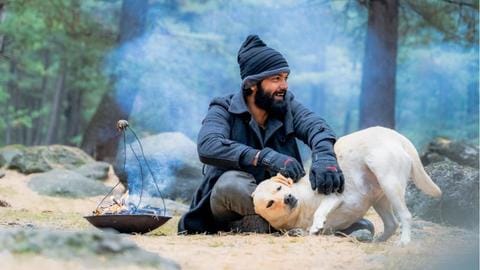 The much-awaited trailer for the Kannada film 777 Charlie starring Rakshit Shetty was finally unveiled on Monday. The actor took to social media and shared the trailer in several languages, including Kannada, Telugu, Tamil, Malayalam, and Hindi. Directed by Kiranraj K, the film will revolve around a man and his dog and portray the beautiful relationship between them. Here's a breakdown.

Dharma (Shetty) is introduced as a laid-back chap with no interest in life. All he cares about is his home, factory, fights, food, beer, and cigarettes. His neighbors despise him and call him "Hitler uncle." Later, we see Charlie (the dog), who somehow enters Dharma's life. In the beginning, Dharma seems to hate Charlie and tries to get rid of him.

We then see Dharma meeting with an accident and Charlie following the ambulance all the way to the hospital. That's when Dharma starts connecting with him. He identifies Charlie as the only soul that cares about him. The trailer reveals the story with no scope for suspense. At one point, Charlie presumably goes missing. How Dharma finds him forms the rest of the plot.

The canine steals our hearts toward the end. When Dharma asks Charlie how much he loves him, Charlie walks toward Dharma and embraces him. An emotional Dharma hugs him back uttering, "I love you too, Charlie." And, you too would want to hug Charlie tightly.

Details
'777 Charlie' is produced by Shetty along with GS Gupta

777 Charlie has been produced by Shetty and GS Gupta under the Paramvah Studios banner. Besides Shetty, the film also features Sangeetha Sringeri, Raj B Shetty, Danish Sait, and Bobby Simha in pivotal roles. The adventure-comedy drama brings together several celebrities to present it in various languages. While actor Prithviraj Sukumaran will present the Malayalam version, Karthik Subbaraj will be presenting the Tamil version.