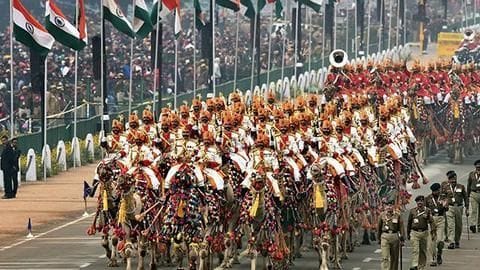 Today, India celebrates its 69th Republic Day. The parade this time is historic: there are 10 chief guests, the leaders of the 10 ASEAN nations. About 100 government agencies were involved in the massive preparations. This time, there will be 23 tableaux in the parade. In Kashmir, mobile internet services have been suspended as a precautionary measure. Here's how India is celebrating the day.

Parade
The parade in Delhi is unique this time

The 10 chief guests include Aung San Suu Kyi (Myanmar State Counselor), Rodrigo Duterte (Philippines President) and Hassanlal Bolkiah (Sultan of Brunei). All India Radio is debuting its tableau. The ITBP float is returning after 20 years. Women BSF personnel will showcase their motorcycling skills for the first time. It was the record 18th march for 47-year-old BSF jawan Dara Singh.

Delhi
Heavy security and traffic restrictions in the national capital

Delhi has a heavy security cover, with sharpshooters and anti-aircraft guns deployed at strategic locations. Traffic's been restricted on roads connected to the parade venue. Google Maps will provide information on alternative routes. Police have urged commuters to start 30 minutes earlier while traveling. Entry/exit at Central Secretariat, Udyog Vihar, Lok Kalyan Marg/Race Course and Patel Chowk metro stations will be unavailable till 12pm.

In his R-Day speech, President Ram Nath Kovind said a "civic nation" is where "one can disagree with another viewpoint- or even a historical context- without mocking a fellow citizen's dignity and personal space." He also urged institutions to be "disciplined and morally upright": "where holders and members make every attempt to live up to the office they occupy as trustees of the people."

Information
No exchange of sweets with Pakistan Rangers at Attari

The Ashok Chakra went to Late Air Force Commando JP Nirala, who was killed in a Bandipora encounter. In a break from tradition, the BSF didn't exchange sweets with Pakistan Rangers at the Attari-Wagah check-post amid heightened bilateral tension.