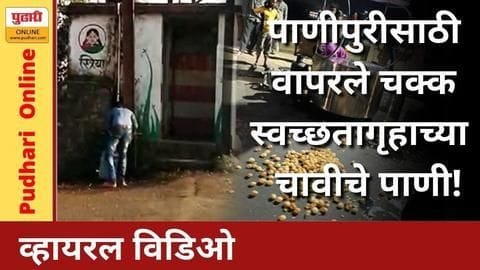 In an undated video, the pani puri vendor is seen filling up a bottle of water from outside a public toilet near the food cart. He then carries the bottle to the cart across the street and empties it into a metal drum, which is often used by pani puri vendors to make the spiced water served with the snack.

According to the Zee News report, the street vendor seen in the video stations the stall near Rankala lake in Kolhapur. NewsBytes could not independently verify the veracity of the video. The vendor's cart was damaged by people, who were angry after the video went viral. Reportedly, people threw the snacks served by the vendor onto the street and destroyed the cart.

In a similar case, a pani puri vendor in Ahmedabad, Gujarat, was sentenced to six months' imprisonment in 2017 after he mixed toilet cleaner in the snack. A case had been registered against the vendor, Chetan Nanji Marvadi, in 2009. In 2011, the Maharashtra Navnirman Sena had attacked over 300 food stalls after a pani puri vendor was caught urinating in the serving vessel.