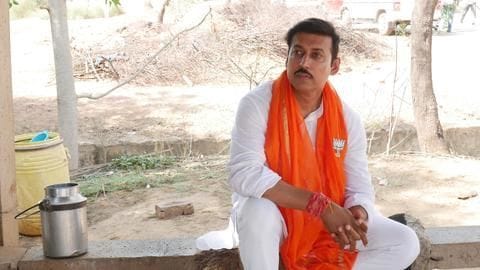 The political heat in the nation has become directly proportional to mercury. Tensions are running high and a lot is at stake for parties. But Union Minister Rajyavardhan Singh Rathore is confident Prime Minister Narendra Modi will get a second term. Sitting under the scorching sun with saffron stole wrapped around his neck, Rathore spoke to NewsBytes where he discussed five years of Modi government, the big nationalism debate, Opposition, and much more. Here are the excerpts.

Journey
From Army to Olympics to politics: Looking at Rathore's journey

As he completes his first term as MP, Rathore had good things to say about the government. When asked how he assesses the last five years, Rathore said this government instilled confidence among citizens. He claimed that people had lost hope in politics before PM Modi came to power. No one was able to change the system and those who tried failed. But PM Modi did the impossible.

"Earlier, corruption was rampant and country crawled. PM Modi steered the country towards a new direction," Rathore said and added politics of accountability replaced the politics of privilege. Rathore added everyone in the government knows ground realities. "For example, people of different sections gave suggestions for budget and it was implemented," he added. This is why schemes reached the people, claimed Rathore.

BJP got a historic mandate in 2014 and everyone opined Modi wave worked its magic. When Rathore was asked if the wave had died down, he said, "Everyone from Delhi asks this." Rathore then said people can see the wave from a distance. "But when a current exists in the ground, it's important to stand on the ground to feel it," he said.

Quote
Everyone knows PM Modi is a visionary: Rathore

"Zameen me current chal raha hai Modiji ka. Everyone knows PM Modi has a vision and he is capable enough to see it through. PM Modi is energetic and everyone in the nation knows this," he added.

Opposition
Opposition is divided, everyone wants to be PM, said Rathore

While Rathore has brilliant things to say about the government, Opposition parties including Congress, obviously don't. When he was told Congress and other parties spoke about corruption in Rafale deal, unemployment, etc., Rathore replied, "There is no Opposition. It is divided now more than ever. Everyone wants to be PM." He even questioned Congress' credentials to qualify as an Opposition party.

"When we talk about the Opposition, leaders like Mamata Banerjee, Chandrababu Naidu, Mayawati come to mind. See, Congress doesn't exist anymore. I get hurt sometimes thinking how Congress shrunk or what issues they pick. They keep lying and they don't respect any institution," Rathore said.

Rathore also claimed SP-BSP alliance or Priyanka Gandhi Vadra's entry into active politics won't affect results. He said BJP's fight was against corruption, terrorism, and casteism. "On one side there is a strong captain whose teammates have blemish-free records. On another side, there is no team, but there is a fight for captaincy," Rathore explained, bringing out his sportsman side.

"Before 2014, people didn't see a majority government for almost 30 years. As a result, work got stuck. People had to give bribes and corruption increased. Do you want to see those days again," Rathore asked.

Now, BJP has made nationalism its core issue this election season. All leaders starting from PM Modi to cadres are talking about Balakot airstrikes. This has put BJP at receiving end of ire and it has been accused of politicizing armed forces. But Rathore said this wasn't the case. He said PM Modi had the will to act against terrorism when others didn't.

Rathore said earlier planes didn't even fly when India was attacked as everyone thought it could lead to war. "But PM Modi said we will not sit idle after attacks and we will also not start a war. We will only finish those who attacked us," said Rathore. He argued that the operation could have been unsuccessful as well but PM Modi took a risk.

With rallies and meetings of leaders going on in full swing, many have given controversial statements. When Rathore was asked about this, he replied sternly, "I talk only about myself". "I can challenge you to accompany me to villages and see that houses have been built under PMAY scheme, gas cylinders have reached houses and people have benefited from Ayushman Bharat scheme," he stressed.

Quote
Rathore said talking about nationalism isn't wrong at all

"Don't understand why shouldn't we talk about nationalism. You must have read stories of Maharana Pratap and Shivaji. That was nationalism and patriotism. When we learned their tales as a kid, why should we not talk about it after growing up," questioned Rathore.

While BJP's chest-thumping around nationalism doesn't seem to end, its Bhopal candidate Pragya Thakur spoke ill things about martyr Hemant Karkare. She claimed Karkare died because she cursed him. When asked for an opinion on this, Rathore replied, "Will I answer for everyone?" However, he asserted people should talk about police misuse and claimed it started when Congress was in power.