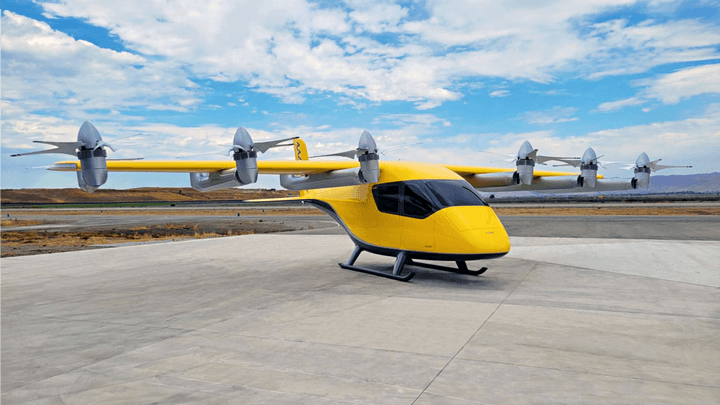 Boeing-backed Wisk Aero has revealed an all-electric, four-seater autonomous air taxi. Currently, the company is seeking approval from the Federal Aviation Administration (FAA) to begin the commercial air taxi service. The sixth-generation aircraft will be controlled primarily by an autopilot system, with remote human pilot supervision. It will use the rooftops of buildings as "vertiports" for takeoff and landing.

What comes under FAA certification?

All about Wisk Aero's sixth-generation aircraft

Wisk's aircraft is equipped with six front rotors, each with five blades that can tilt horizontally and vertically. The four-seater autonomous air taxi gets six rear rotors, each consisting of two blades that remain fixed vertically. The company claims that the aircraft can fly at 2,500-4,000 feet altitude above ground with 120 knots (nearly 222km/h) speed, and 90 miles (around 144km) range with reserves.

Wisk plans to offer an app-based inter-city flying taxi service. The company plans to introduce its air taxi service in around 20 major markets with 14 million flight operations on annual basis, within the next five years.

Wisk claims that its sixth-generation aircraft will be the first-ever electric vertical takeoff and landing (eVTOL) candidate with FAA certification. However, it is not the only contender in the race. Businesses such as Volocopter, Joby Aviation, Archer, and Ehang have asserted that they are about to introduce autonomous air taxi services. They have even been able to secure financial backing from well-known automobile brands.