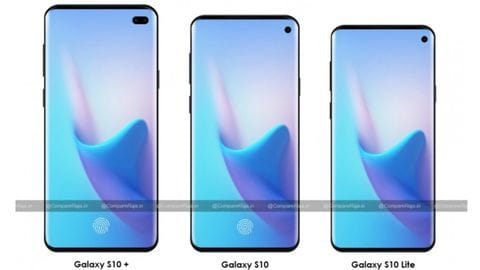 Samsung will unveil its tenth-anniversary edition Galaxy S10 flagships on February 20. And in the run-up to the much-awaited event, an alleged Galaxy S10 teaser video was leaked online, confirming the launch of the upcoming models in February. Separately, the Galaxy S10 lineup was spotted on a certification site, giving away the battery details of all the three S10 models. Here's everything we know.

Leaked
Here's the battery specifications of the Galaxy S10 models

Up front, both the S10 and S10+ will feature curved Infinity-O displays with a single front camera on the former and a pill-shaped dual camera on the latter. Further, both phones will have a horizontally-stacked triple rear-camera, USB Type-C port, and a headphone jack. Moreover, they were seen without a physical fingerprint scanner, confirming previous speculations of an in-screen fingerprint sensor are correct.

As per the leaked live images, the S10 seems to have a marginally thicker bottom bezel than the Galaxy S10+. Hence, we expect the Plus model to offer a slightly higher screen to body ratio than the regular S10. Moreover, an earlier leak claimed that both phones will come in black, white, yellow and green colors with a gradient finish on some options.

Samsung's upcoming flagships will be powered by the latest mobile chipsets available. Hence, depending on markets, all Galaxy S10 models should come with Qualcomm Snapdragon 855 or Exynos 9820. Moreover, the S10-series will also debut the recently announced Android Pie-based One UI. And, Gizmodo UK previously claimed that S10 will offer Powershare - a reverse wireless charging feature (similar to Huawei Mate 20 Pro).

Unofficial
UK pricing details of all the Galaxy S10 models

Information
Finally, a word on the availability of Galaxy S10 flagships

The S10-series will be unveiled at a Samsung Unpacked event on February 20 - just five days ahead of the Mobile World Congress 2019 event. Moreover, all variants will reportedly be available for pre-orders after the event and will go on sale starting March 8.