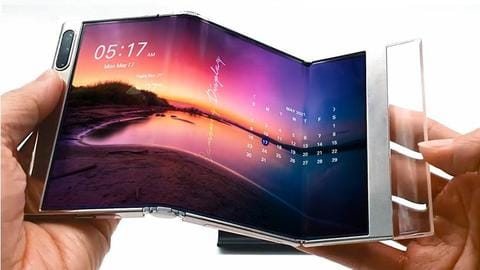 Samsung was the first to market foldable smartphones when it launched the Galaxy Fold in September 2019. In December last year, the company reaffirmed its commitment to the technology. Samsung's prototypes showcased at Display Week 2021 didn't disappoint, either. It showed off a double-folding display, a slidable OLED, foldable Galaxy tablet, and under panel camera (UPC). Here are more details.

Display Week is an annual technical symposium that addresses areas of rapid growth in display technology. This year's event will run from May 16 to May 21. First off, Samsung's virtual showcase included a bi-folding OLED panel that featured two hinges folding out in opposite directions. Dubbed as the S-Foldable, the device can offer a maximum screen size of 7.2 inches, SamMobile reported.

Additionally, Samsung also showed off a Slidable OLED that unravels horizontally like a stiff scroll. Similar concepts were also teased at CES 2021 by TCL and LG before the latter shuttered its smartphone business. Chinese firm OPPO is also experimenting with roll-out displays. At Display Week, it revealed the X 2021 rollable prototype, which can switch between 6.7-inch and 7.4-inch screen sizes.

Bigger and better?
Samsung could use Galaxy Fold-like hinge on huge upcoming Tablet

Although details about Samsung's rollable OLED remain vague, the company appears to be confident of its hinge design which has been incorporated into a foldable Samsung Galaxy tablet prototype. Samsung showed off a 17-inch panel that maintains a 4:3 aspect ratio when unfolded. To put that into perspective, the unfolded screen is larger than most full-size laptops.

Samsung's last exhibit was an almost bezel-less laptop which packed a front-facing camera hidden beneath the display close to the top bezel. The company previously teased under-display camera technology on Chinese social media. Rumor has it that the upcoming Galaxy Z Fold3 could feature an Under Panel Camera, although similar rumors have been heard about Xiaomi phones as well.