Home / News / Technology News / What happens when you give AI curiosity? It keeps exploring
Technology

What happens when you give AI curiosity? It keeps exploring 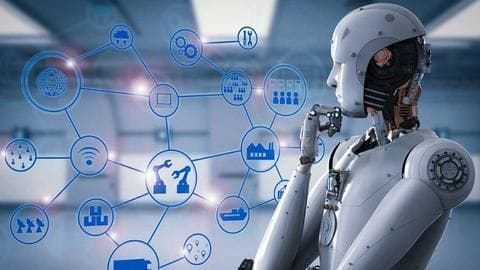 Despite having myriad applications that make our lives easier, artificial intelligence lacks one fundamental human trait of intelligence - curiosity. So, what happens when you give AI curiosity? This was the question that drove Elon Musk-founded non-profit AI lab, OpenAI, to design a 'curious' AI engine. The results? The AI, without any human-provided information or guidance, kept exploring and exploring. Fascinated? Here are the details.

Research
Despite being in early stages, the research showed astonishing results

Researchers from OpenAI, in collaboration with researchers from UC Berkeley and University of Edinburgh, set out to explore how to give artificial intelligence engines a sense of curiosity. While still being in early stages, the researchers found astonishing results. With a simple definition of curiosity, their AI engine, without any human guidance, explored 50+ video games, and simply couldn't stop watching TV.

Curiosity
How do you make artificial intelligence curious?

The definition of curiosity used by the OpenAI team was a relatively simple one. Curiosity, for the algorithm, involved predicting what its environment would look like one frame into the future. When that next frame happened, the algorithm would be rewarded based on how right/wrong it was. The idea? If the algorithm correctly predicted the next frame, it had seen it before.

Games
The AI was pretty adept at exploring and beating games

Armed with curiosity, OpenAI's algorithm proved to be quite adept at exploring over 50+ video games and their levels, and even managed to beat some of them, all without human guidance. The AI proved particularly adept at games like Super Mario, which involves exploring ahead and progressing to the next level. However, that's not all the AI could do.

TV
The AI was then given the option to watch TV

The AI was also put to a TV-watching test. Why? The static on TV channels is extremely random, thereby making it difficult for the curious AI to predict the next frame. So, researchers put a digital TV in a 3D environment. When the AI found it and started flipping through the channels out of curiosity, it simply couldn't stop watching TV.

Spurred on by the system that rewarded it for seeing new things, the curious AI got glued to flipping TV channels which showed it a stream of new images. Researchers said that the AI also had the ability to pry itself away from television, but only when its environment offered something more interesting. What constitutes 'interesting' for the AI? We don't know.

Applications
The AI could become a game tester one day

However, the point of the research wasn't about watching TV or beating video games. Instead, it was aimed at understanding how algorithms could better understand the world around them. Based on preliminary findings from the study, researchers claim that this curious AI could be adapted to make debugging code easier, or to test video games by playing through them and finding glitches.