Meet Astro, 'robo-dog' that trains, behaves like a real dog 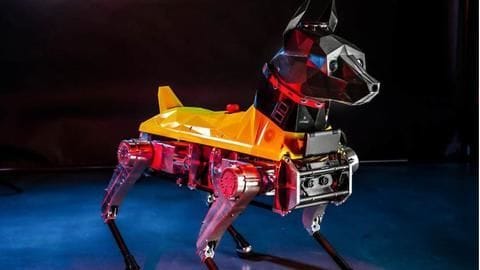 After Boston Dynamics' creepy SpotMini and Sony's sweet Aibo, we have another four-legged robo-dog on the block - Astro. The robot, developed by researchers at Florida Atlantic University, looks more like a mix of the existing duo and features a rather realistic Doberman-like head and the ability to behave and train like a real dog. Here's all you need to know about it.

With its 3D printed head, shaped-like that of a Doberman, and pretty uncanny eyes, Astro looks like a real dog. It has been undergoing puppy training and can already behave like a real dog with the ability to walk, sit, stand, and lie down on command. The functions of the 45-kg robot are powered by actuated joints and a range of sensors, radars, cameras.

Unlike other quadrupedal bots, Astro doesn't need pre-programmed instructions to perform a certain set of actions. Instead, the machine relies on a deep neural network, which rests inside its head, like a brain, enabling it to learn from experiences and behave like a dog. So, in simple terms, you could train Astro, pretty much like a real dog.

The team says Astro will eventually get the ability to respond to hand signals as well as identify colors and various languages. It will also be able to work in conjunction with a pack of drones and recognize its human or animal counterparts. However, as of now, it isn't clear when these capabilities will go live.

Application
Astro could be employed in several fields

When ready, the robo-dog could come handy in a range of applications, including military and search and rescue operations. This could involve working as a scout to detect drugs, explosives, and guns in an area or joining a team of emergency responders to identify victims and get help to them in time. Other applications could involve aiding visually impaired or surveilling regions.