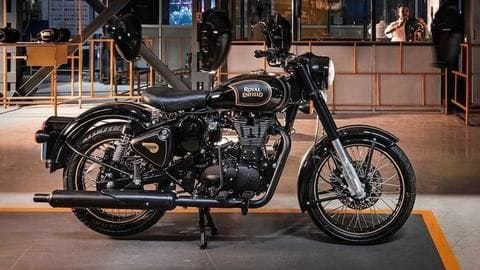 Royal Enfield has launched a special Classic 500 Tribute Black motorbike in Australia and New Zealand. Its production is limited to just 240 units. The Tribute Black model is handcrafted at the Oragadam plant in Chennai. It comes with a touring leather seat, black livery for the engine, a serial number plaque, and hand-painted Royal Enfield pinstripes by the Kumar Brothers.

Design
The bike has a halogen headlight and 13.5-liter fuel tank

The Royal Enfield Classic 500 Tribute Black sits on a single downtube frame and has a teardrop-shaped fuel tank, a flat-type seat, a lengthy exhaust, and a rounded headlight as well as mirrors. The bike packs a semi-digital instrument console, a halogen headlight, and rides on wire-spoke wheels. It has a 13.5-liter fuel tank and tips the scales at 193kg.

Information
It is fueled by a 27hp, 499cc engine

Safety
It is equipped with 35mm telescopic front forks

To ensure the rider's safety, the Royal Enfield Classic 500 Tribute Black is equipped with disc brakes on both the front and rear wheels, along with dual-channel ABS to avoid skidding on the roads while braking. Suspension duties on the motorcycle are taken care of by 35mm telescopic forks on the front side and twin gas-charged shock absorbers on the rear end.

In Australia, the Royal Enfield Classic 500 Tribute Black carries a price-tag of AUD 9,590 (around Rs. 5.37 lakh) and can be pre-booked until June 23. The special edition was also launched in India last year to mark the end of the 500cc UCE engine.