Home / News / Entertainment News / 'Aila Re Aillaa': Akshay-Ajay-Ranveer give their all in dance number
Entertainment

'Aila Re Aillaa': Akshay-Ajay-Ranveer give their all in dance number 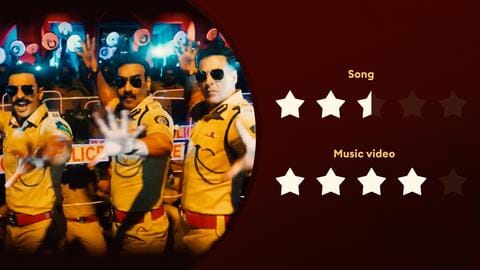 Ahead of its highly anticipated theatrical release on November 5, Sooryavanshi makers dropped its first musical number, Aila Re Aillaa. A recreation of Aila Re Aila from Akshay Kumar-led Khatta Meetha, the fun, breezy song undergoes "macho-fication" here. Along with Kumar, who leads this police drama, his fellow stars—Ajay Devgn and Ranveer Singh—of Rohit Shetty's cop universe feature in the clip. Here's our review.

Song
The recreation fails to recreate magic of the original

Whenever an original song is iconic, its recreated version will ring in your ears. Tanishk Bagchi's recreation is difficult to listen to in isolation, that is without comparing it with Pritam's original composition. And, the new version does fall flat. Daler Mehndi has sung the track, for which lyrics have been penned by Shabbir Ahmed. Nitin Raikwar had written the original lyrics.

Video
'Sooryavanshi' trio is super energetic in the clip

But Kumar, Devgn, and Singh are phenomenal onscreen dancing to the beats. Kumar is the main featuring artist here and his energy doesn't falter even once. Interestingly, choreographers have chosen cheesy/fun steps to go with the song and all the actors (even a stoic Singham) deliver on it. We were low-key expecting leading actress Katrina Kaif and director Rohit Shetty to feature as well.

Trend
Shetty is banking on star power of all three heroes

Like this song, Shetty and team have time and again brought in Devgn and Singh to promote the upcoming actioner. Given the Hindi film industry is looking at Sooryavanshi to bring back the audience to the cinema halls, makers seem to be banking on the trio's collected star power. But leaving out Kaif from promotional videos when she has a lead role is upsetting.

Verdict
Film's tracklist to have three songs, alongside one audio-only track

As per reports, the action-packed entertainer will feature three recreated songs along with an audio-only track crooned by Arijit Singh. One of these recreations is Kaif's version of the legendary Tip Tip Barsa Paani and expectations are quite high. We hope the other recreations would land better than this one. Verdict: The song bags 2.5/5 while the colorful video gets 4 stars.