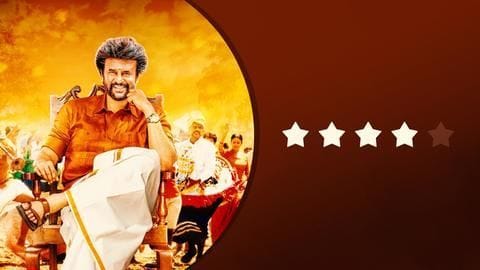 Makers dropped the first song from Rajinikanth's much-anticipated Diwali release Annaatthe. Titled Annaatthe Annaatthe, the D Imman track is like other intro songs in the South film industry as it gives us an introduction to Rajinikanth's character. Notably, this song has been sung by the late SP Balasubrahmanyam and this happens to be his last collaboration with the Darbar actor. Here's our review.

The track is instantly catchy with SPB's voice perfectly complementing the instrumentals. Highly energetic and enthusiastic, the song will be an absolute treat for Rajinikanth fans. The National Award-winning music composer doesn't disappoint and the lyrics by Viveka are fitting for the introductory song of the film. The chorus by female singers slightly brings down the energy quotient, although the overall effect remains intact.

With a festive background, we catch Rajinikanth shaking a leg

As is the norm with intro songs, makers have packed the track with a lyrical video. We can see the superstar onscreen celebrating what seems to be a festival in the village. As per reports, the film will be a family drama, and the visuals shown in this video suggest a gala time. Toward the end, Rajinikanth can be seen dancing too.

Ahead of the song's release, the 70-year-old wrote an emotional note for his frequent collaborator. Taking to Twitter, the Enthiran star said he had never dreamed this song will be his last time working with the veteran singer. "My love SBP will live on through his sweet voice forever." To recall, the legendary singer died on September 25, 2020, due to COVID-19 complications.

The action-drama movie comes out on November 4

Coming to the movie, Annaatthe can be expected to set the box office on fire as it comes out on November 4. Currently in the post-production stage, this action-drama also stars Keerthy Suresh, Nayanthara, Khushbu, Soori, and Prakash Raj. Produced by Sun Pictures, the movie has been written and directed by Siva. Verdict: Annaatthe Annaatthe will surely set the mood, it gets 4/5 stars.

Rajinikanth undergoes surgery, to be out of hospital soon

This is what Rajinikanth tweeted before receiving Dadasaheb Phalke Award

World Elephant Day: Movies where the cute jumbos are important

Rajinikanth dissolves RMM; says 'no intention to get into politics'

Get amped up with 'Chandigarh Kare Aashiqui' title song!

'Annaatthe' review: Rajinikanth's every effort to make this click fails

Before its November 4 release, a rundown of Rajinikanth's 'Annaatthe'