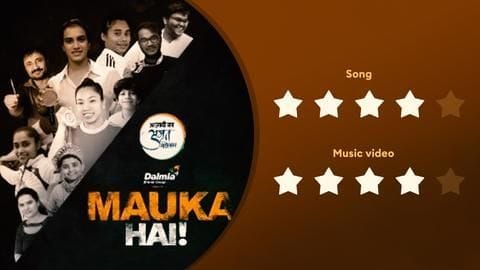 T-Series has released a music video, titled Mauka Hai, crooned by popular singer B Praak. It is dedicated to the unwavering spirit of Indians from different fields, including the unsung heroes whose achievements inspire and open opportunities for others. Rochak Kohli has composed the music and the beautiful lyrics are penned by Manoj Muntashir, who also features in the music video.

In this article
Music Video

Video features the Olympic medalists from our country

The video shows people doing their everyday work like corporate jobs, sports training, teaching, fashion designing, and architecting, among others. It covers the fields in which Indians have made the country proud. The clip also shows a few faces that are budding achievers. Also, 2020 Olympic medalists like PV Sindhu, Neeraj Chopra, Mirabai Chanu, and the Indian men's hockey team appear in the MV.

This video has been released at a perfect time, which is during the Independence Day weekend. While the lyrics are not about the occasion, it is about the citizens who deserve to be lauded for their hard work. And not only them but this clip is also dedicated to each and every Indian for their struggle to reach the moon. Praak's voice sounds fantastic.

Despite not featuring any big celebrity, the song has touched hearts just because of its content, which is quite relatable to common people. Appreciating the track, a user commented, "Glad to see a motivational song like this," while another wrote, "What a cinematography, editing and mixing... this song deserve award (sic)." Apart from Praak's voice, many praised Muntashir for the beautiful and inspirational lines.

When lyrics, vocals, and music blend flawlessly, the product will be perfect. Mauka Hai is one such product. While Praak has done a marvelous job with his voice, Muntashir's words are the real winner. Also, the video, available on YouTube, is impressive, as it motivates you to follow your heart and passion. Verdict: 4 stars each for the song and the music video.