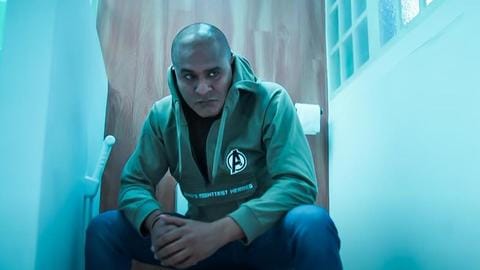 Prabhu Deva is challenging his limits as an actor in Adhik Ravichandran's upcoming thriller Bagheera. Makers dropped the trailer for the serial killer-themed movie recently and the dancing star wows us with his various get-ups. However, the portrayal of the said serial killer in the clip seems to be problematic at its worst and misleading in the least. Here's a trailer breakdown.

By the looks of it, Prabhu Deva is a psychopath who takes over aliases and lures in women—sometimes even marrying them—to ultimately kill them. His motive seems to be acting as a messiah to all men who were wronged by women. In one scene, a woman is asked if she drinks. Given she becomes his target suggests he considers drinking [for women] a vice.

We hope makers don't justify Bagheera's misogyny in the movie

Although the Radhe director's character gets called all sorts of alarming names (sociopath, psychopath, and serial killer), the fact that he is the titular character and has a chirpy title track thumping in the background is disturbing. It suggests Ravichandran, who has also written the movie, might find a way to justify Bagheera's misogyny and paint him as the victim. We hope he doesn't.

While this anticipation might look presumed just from the trailer, Indian cinema has a history of justifying stalking, raping, and sexual harassment as a birthright of every desi lover boy. In case you need examples, Dhanush's victim play in Aanand L Rai's Raanjhanaa is outright problematic. In Tamil cinema, we have Ajith's Varalaru where the hero rapes a girl because she called him effeminate!

Coming back to the case in point, Bagheera looks terrifying and yucky, so points to the makers for that. Actor Prabhu Deva also deserves praise. Now, the treatment will decide the movie's merit. Apart from the ABCD star, the thriller will feature Amyra Dastur, Ramya Nambessan, Janani Iyer, Sanchita Shetty, Gayathrie Shankar, Sakshi Agarwal, and Sonia Agarwal. It will get a theatrical release soon.