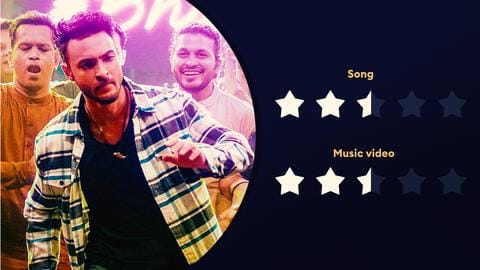 Following the high-octane track Vighnaharta, makers of Antim: The Final Truth have dropped another upbeat song, titled Bhai Ka Birthday, today. While this song features Salman Khan's cop avatar, it has mostly been picturized on his co-star/relative Aayush Sharma, who plays a gangster. Spoiler alert: Contrary to what you might think, we are not celebrating Salman Bhai's birthday here. Read on for our review.

We get characteristic 'desi' music but sans any outstanding element

Music composer Hitesh Modak uses characteristically desi party tunes along with the use of Indian classical instruments to create an indigenous feel. It's a good diversion from recent westernized tunes. But the song sounds too repetitive on your ears with the chorus being the larger part of the track. There is no build-up and beat drop and you're just plopped into the action.

Sharma is brilliant with his expressions and absolutely nails choreography

Sajid Khan has voiced the song, for which very surface-level lyrics were written by Nitin Raikwar. But these words suit the setting, where a gangster (Sharma) is celebrating his Bhai's (an influential figure's) birthday. Usual party scenes are featured and there's nothing here that we have not seen before. Notably, Sharma is brilliant with his expressions and absolutely nails Mudassar Khan's choreography.

As we understand, the said influential figure has police protection and hence Khan along with a few other cops are also seen standing guard at the party. While he seems to be hating the job, his cop persona, Rajveer, finally gives in to the maddening atmosphere around him and starts doing bhangra steps toward the end. Bhai fans are going to love this surely.

The song was released at Jaipur's Raj Mandir theater

Interestingly, the song was released at Jaipur's Raj Mandir theater, one of India's biggest single-screen theaters. Sharma was present at the theater and he reportedly also met with fans who have their birthdays in November. He revealed the song comes at an important juncture in the movie. Verdict: We'll give the song and video 2.5/5. Mark your calendars, Antim releases theatrically on November 26.

5 Bollywood sequels that we are eagerly waiting for

'Antim' and 'Atrangi Re' to be digitally released simultaneously

Want to be Salman Khan's tenant? Shell out Rs. 95K/month!

Salman Khan to host his first IIFA awards next year

'Antim' review: Salman Khan's actioner is not worth your time

'Hone Laga' review: 'Antim's third song is all about passion