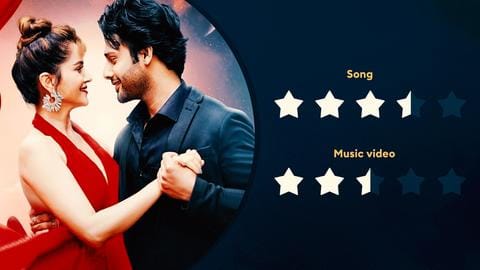 Actress Rubina Dilaik is back with a new song feature in Stebin Ben's Bheeg Jaunga. The romantic track has been penned and composed by Mukku while Avvy Sra has been credited for the music. Dropped today, the song is enjoying great success on the internet owing to the Bigg Boss 14 winner's massive fanbase. But is the hype worth it? Here's our review.

'Show us your love,' wrote Dilaik

The track is a likeable fresh romantic number

The song begins with a cheesy romantic line and it is immediately followed by the first verse, establishing the rain and love motif. The use of traditional qawwali sounds meshes well with Ben's voice. At three minutes and 41 seconds, the length of the track is bearable. Overall, it is a fresh romantic track. However, the video clip fares well below the expectations.

Dilaik doesn't get to do much in the video

Ben, who also stars in the clip, appears natural while acting. He executes the look of an enamored loverboy quite right. On the other hand, the Ardh actress doesn't have much to do here, except for running in magnificent dresses with long trains and looking madly in love. The leads look good together but the problem is their romantic scenes don't really look appealing.

Dilaik running through a forest in her red dress will remind you of Shraddha Kapoor's outfit in the song Milne Hai Mujhse Aayi from Aashiqui 2. The fantastical story in the music video, directed by Team Sapphire, is also something we have seen several times in Bollywood. Rubiholics, as the popular actress's fans are called, naturally went all out and showered love.

Treat for Dilaik fans, not so otherwise

Dilaik last featured opposite her husband Abhinav Shukla in Vishal Mishra's Tumse Pyaar Hai. And here, her look is completely different, which will be a treat for her fans. Others can pass this one though. Produced by Nitin Talwar, you can check out the song on Orrange Studioz's official YouTube Channel. Verdict: The song gets 3.5/5, while the music video gets 2.5/5 stars.