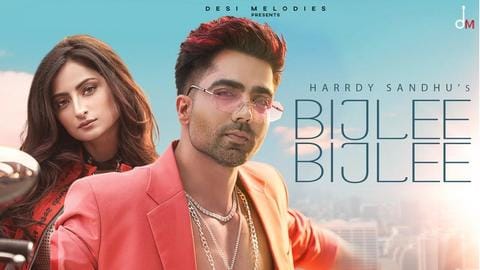 Popular singer Harrdy Sandhu dropped his latest single, reuniting with the hitmaking trio of BPraak, Jaani, and Arvindr Khaira after his 2018 venture Kya Baat Ay. Titled Bijlee Bijlee, the fun and peppy track features Sandhu with actress Shweta Tiwari's daughter, Palak Tiwari, marking her debut in the music video industry. With all elements of success present, did the project excel? Here's our review.

The catchy number is characteristically Sandhu's and fans of the crooner will find his signature tune and style in this. Upbeat but not overbearing, the song flows smoothly and is groovy to nod along to. The lyrics don't have much depth. Sung by Sandhu, the Punjabi pop track is composed by Jaani who also penned the lyrics. BPraak has been credited for the music.

Video
The video has been structured to not make much sense

The video spells out a nonsensical story of a lightning (bijlee) girl, played by Tiwari, who comes to Sandhu's rescue (who is a cowboy for some reason) in a fantastical world. The superhuman is enamored by Sandhu's character and sort of forces him to tag along with her. In a subversion, here, the boy falls in love with the girl within a song's span.

Bijlee Bijlee is out now. I am so so happy for the release. Thank you @palaktiwarii @jaani777 @bpraak @arvindrkhaira for all your efforts and hard work.
Please go and check it out on youtube and comment how you like it.
Lots and lots of love ❤️https://t.co/uHbIgqD14t#bijlee pic.twitter.com/xPp1jAJNh5

Information
It's good to have singer Sandhu back!

Given the entire video specifically depends on dance sequences and sci-fi elements for its appeal, the lack of cohesivity in the story doesn't hurt. Tiwari is brilliant with the dance steps. Other than that, she doesn't have much to do. Sandhu had expressed his glee at returning to the recording studio after being preoccupied with acting projects. It's good to have him back!

Verdict
The song scores high, the video could have been better

For the unversed, Sandhu will grace our screens as cricketer Madan Lal in Ranveer Singh's sports drama 83. He also has Ribhu Dasgupta's upcoming action thriller starring Parineeti Chopra. On the other hand, Tiwari is set to debut in Bollywood with a horror flick, Rosie: The Saffron Chapter. She will play the titular character. Verdict: Bijlee Bijlee gets 4/5, while the MV gets 3/5.