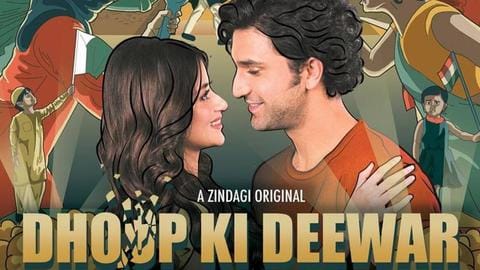 Trailer of Dhoop Ki Deewar is out! The web series is about two families who have lost their loved ones in Indo-Pak wars. Set to stream on ZEE5, it stars Pakistani actors Sajal Aly and Ahad Raza Mir, who play Sara from Pakistan and Vishal from India, respectively. The trailer shows how the lovers, belonging to the warring nations, find solace in each other.

Story
Families destroyed because of strife between India and Pakistan

At the beginning of the video, the lead characters are seen giving interviews to the media about how their families have lost their kin because of the hatred between the two nations. Their families call each other dushman, but an online chat between Sara and Vishal changes their perspectives. Both of them understand that they share the same loss, no matter who wins.

Details
This conflict between 'hate,' 'heart' gets solved from June 25

We get to know that both of their fathers have died in these wars. This grief brings them together. But, their families fail to understand why they are so empathetic and not hateful toward each other. The duo asks their families when this game of death will end. This conflict is the center point of this series, which is releasing on June 25.

Performance
Aly and Raza's performances look promising in the trailer

Aly and Raza, who are married in real life, have a sizzling chemistry in the trailer. Aly, who has appeared in Sridevi's Mom, won appreciation on social media for her performance. Raza, also a popular Pakistani actor, shines as well, alongside her. The series also has several talented actors like Zaib Rehman, Samiya Mumtaz, Manzar Sehbai, Savera Nadeem, Samina Ahmed, and Adnan Jaffar.

Directed by Haseeb Hasan, the series has been written by Umera Ahmed. Talking about it, Hasan said, "Dhoop Ki Deewar is a reflection of positivity beyond borders, religion and societal biases." "In the show, a subject such as cross-border love story has been dealt with so differently and has an underlying message of peace, harmony and joy of life," the director added.