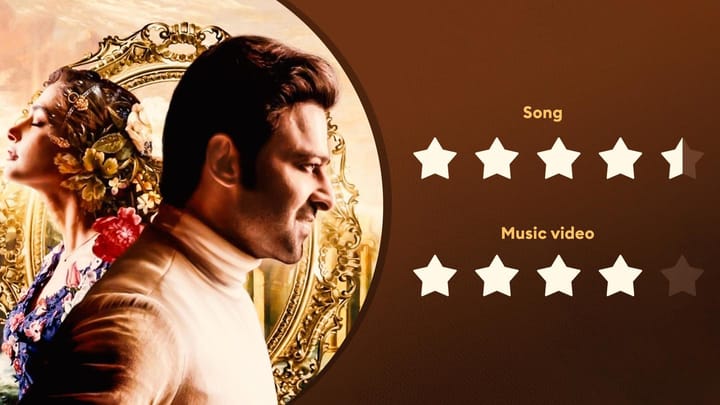 The first single from Prabhas-Pooja Hegde's Radhe Shyam is here! Titled Ee Raathale, the melodious and romantic number has made sure that the wait was worth it. Along with the track, a lyrical song video was also shared by the makers. Apart from Telugu, versions of the song were also released in other languages such as Kannada, Tamil, and Malayalam. Here's our review.

Visuals have animated versions of Prabhas and Hegde

As far as the lyrical video is concerned, it has animated visuals resembling the lead actors. It can be anticipated that the film will be about reincarnation and circle around soul mates getting reunited in several births. There are several other hints in the song such as a whole new universe inside an ocean, which have ignited our anticipation about the film's plot.

Song hints that the film's plot will have reincarnation angle

The song starts with Prabhas driving a car and following a train. As it moves further, Hegde is shown. Just when they both meet, the train derails and falls off a cliff. Later, they both are seen traveling in the car and then taking a plunge into an ocean. It shows several attractive elements and they both are seen getting united time and again.

The words lend a poetic feel to the track

As mentioned before, the song has been released in various languages, but we heard the Tamil version to understand the lyrics better. The words have a poetic narration about a couple that is reminiscing memories from their previous births as they find each other familiar.

Talking about the song, Yuvan Shankar Raja and Harini Ivaturi have cast a spell with their magical voices. Justin Prabhakaran has composed the music, while Krishna Kanth has penned the lyrics. With close to six million views in just a day, it looks like Ee Raathale will turn out to be a huge hit. Verdict: Song and visuals bag 4.5 and 4 stars, respectively.