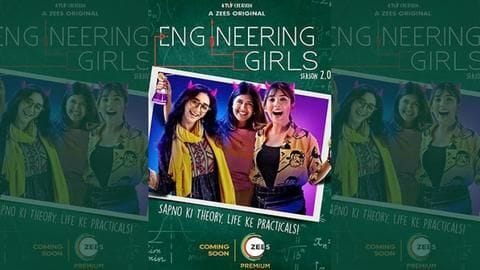 The trailer of TVF's highly appreciated series, Engineering Girls 2.0, has been released. Starring Barkha Singh, Sejal Kumar and Kritika Avasthi as Subu, Kiara and Maggu, the upcoming season is going to be about engineers in their final year. Directed by Apoorv Singh Karki, the web series gained popularity in 2018, when its first season was premiered. It was a five episode long show.

About
What happens in the clip?

"They say, the last year of engineering is the scariest," with this line, the trailer opens, and we find out why it's so in the subsequent scenes. This time, the trio is stressed about "career, placement, job," but also wants to make their final year memorable. How they will overcome their fears and obstacles, while following their dreams is what this season will show.

Observation
Trailer is going to make you feel nostalgic

"The Engineering girls are back. Maggu, Subu, and Kiara reunite for a rocking final year filled with more fun and misadventures," the official synopsis of the trailer on YouTube read. All the actors, who are already quite famous on YouTube, have delivered natural performances. Also, the trailer video is going to make you feel nostalgic, especially for those who have gone to engineering colleges.

Season 1
Where can you watch the first season?

Singh, who has appeared in several TVF series, said, "This show has been special to all of us, and we hope that the audience give Engineering Girls 2.0 double the love they gave to the first season." While you wait for the second edition, watch the previous season, boasting of a 7/10 IMDb rating, on Netflix, ZEE5, SonyLIV and TVFPlay.

Release Date
'Engineering Girls 2.0' to premiere on August 27 on ZEE5

Engineering Girls 2.0 is slated to premiere on August 27 on ZEE5. Will it be better than season one? Let's wait and watch. Meanwhile, ZEE5 is set to release many popular TVF shows, since the two digital platforms have teamed up. Pitchers (Season 2), Tripling (Season 3), The Aam Aadmi Family (Season 4) and Humorously (Season 3) are among the other upcoming web series.