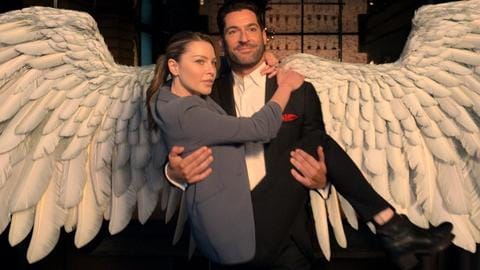 "All bad things must come to an end," but in style! Netflix's hit series Lucifer is no exception as seen from the trailer of its final and sixth season dropped by the streamer recently. As Lucifer Morningstar gets ready to take over the throne of God, he must defeat one last enemy and solve one last mystery with Chloe. Here's a breakdown.

In this article
Trailer

The occult-detective series finale will of course have a mystery unfolding, and the trailer opens with an investigative officer interrogating Lucifer (Tom Ellis). We get to know that he cannot assume his place as God, because he has some unfinished business. Meanwhile, his place on Hell's throne has been captured by a new adversary with red wings who wants to "destroy" Lucifer.

The two-minute and 34-second clip assures fans that the show will retain its dry humor, sarcasm this time as well. Interestingly, as Aimee Garcia's Ella Lopez says, "The laws of nature are breaking down, and the apocalypse is nigh," Lucifer and Chloe (Lauren German) decide to take a vacation in Colombia. There's also an eye-popping, jaw-dropping animation episode in store. Fun times approaching!

As per reports, Brianna Hildebrand of Deadpool-fame is playing the season six's antagonist Rory, who is a "troublemaking angel." Another scene that is perking up Lucifans's interest is when Chloe engages in hand-and-knife combat with Lucifer. Overall, the trailer hints there is an end approaching, in more ways than one, and the Lord of Darkness must prevent it to secure a happily ever after.