Prithviraj Sukumaran is looking for vengeance in 'Kuruthi' trailer 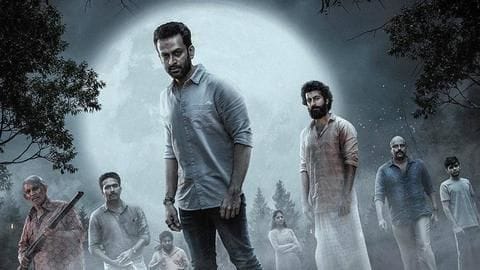 'For every promise, there's a price to pay'

For every promise, there's a price to pay.#KuruthiTrailer out now.

The story takes place inside an old, isolated house

The fast-paced trailer shows an old house in Erattupetta, Kerala, where every character is trying to fulfill their own promises. We understand the tale shuffles between the past and present, talks about sin and punishment. There is a lot of violence, blood, and vengeance in the air. The haunting music and dim red lighting further enhance the eerie feel of the setting.

'Everyone has a story to tell, a decision to make'

As per the synopsis, the story revolves around Ibrahim, who resides alone in the hills. One day, an injured police officer barges into his house with a prisoner and seeks refuge. Like Sukumaran said while releasing the poster, "Everyone has a story to tell and a decision to make" in this one. And, staying true to its genre, the trailer doesn't give away much.

Supriya Menon will be producing under Prithviraj Productions banner

Sukumaran had explained in a press meet earlier why he chose to star in and produce the thriller. "I discovered the script of Kuruthi when I had tested positive for COVID-19 and was quarantined. I was so excited about the film that I decided to act and produce it." It is being produced by Supriya Menon under the banner of Prithviraj Productions.

Notably, Kuruthi marks Warrier's directorial debut in Malayalam. He had described the film as "a fast-paced socio-political thriller set in contemporary Kerala, and it has well-shot action scenes." Anish Pallyal has penned the story, while Abinandhan Ramanujam is the cinematographer. Music and background score has been helmed by Jakes Bejoy. Catch the gripping movie on the OTT platform this Onam.