'Udanpirappe' trailer: Can Jyotika reunite her husband and her brother? 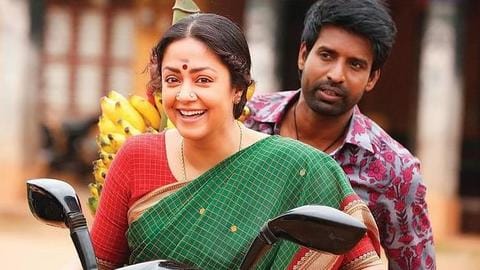 Famed South Indian movie star Jyotika's 50th project, titled Udanpirappe, was recently confirmed to get an OTT release on Amazon Prime Video. Now, the streamer has dropped the trailer for the Tamil film, set to have a world premiere on October 14. Backed by Jyotika and her husband Suriya, the family drama also stars Samuthirakani and Sasikumar. Here's a breakdown of the trailer.

At the fore is Mathangi's husband and brother's animosity

The two-minute-and-24-second video begins in a small agriculture-based locality that is getting ready for some festivity. We hear a woman's voice saying that the entire family should come together during auspicious occasions like a festival, so why does Mathangi (Jyotika) not talk to her brother? She insists her talking to her brother will not solve anything, it is her husband who needs to reconcile.

Next, we are introduced to Mathangi's husband Sargunam (played by Sasikumar) and her brother Vairavan (played by Samuthirakani). Both seem to be virtuous who stand for different things. As Mathangi sums up at one point in the trailer, one of the men stands for law while the other supports truth. She cannot pick a side because according to her both are correct.

While the main plot point gets cleared up pretty soon, obviously writer and director Era Saravanan has several intricate subplots woven into the story. Jyotika's expressions especially impress and it will be a treat to watch her again. Another factor that deserves mention is the music. Composer D Imman has once again done a great job. Rajamani Velraj's cinematography is simple yet appealing.

Apart from the tussle between two men, the movie seems to also speak about agriculture, industrialization, and family values. It looks like it will be a pleasant watch to enjoy with your entire family. The movie also features Soori, Nivedhithaa Sathish, Kalaiyarasan, and Siddhu in important roles. For the unversed, Udanpirappe is part of a four-film deal between the streamer and Suriya's 2D Entertainment.

Bong Joon-ho, 'Parasite' helmer, directing Robert Pattinson in his next?

Black Shark 5 series could be launched in February