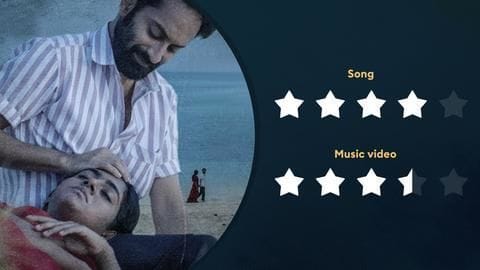 Amazon Prime Video dropped a new song, Theerame, from Fahadh Faasil-starrer, Malik. Crooned by KS Chithra and Sooraj Santhosh, the song depicts the love story of Sulaiman Malik (Faasil) and Mihrunissa (Nimisha Sajayan). Having the beautiful Kerala in backdrop, the song video is mesmerizing and its lyrics instantly touch your heart and soul. To recall, Malik's trailer was recently released, which garnered immense appreciation.

Those romantic glances of newlyweds fill hearts with love

The video begins with a boat reaching a Kerala beach. Full credit goes to cinematographer Sanu John Varughese, who captured this location's beauty nicely. In the song, Malik-Mihrunissa get married and their little romantic moments are shown in simple yet appealing manner. The shots where Malik can't keep his eyes off his bride are awe-worthy. However, in the end, trouble in paradise ensues.

Lyrics: This is what creativity actually means

Theerame means seashore, and the song is all about metaphors. Lyricist Anwar Ali has brought in elements of nature as symbols of love. For instance, it said that Malik, the bridegroom, should remain faithful to his wife like "the clearness of the burning bright sun," which indicates a pristine sky. Meaning, his feelings should be uncontaminated, and his love must be unconditional.

It is all about symbolism in this song

The vast expanse of seashore is used as a measurement of Malik's depth of love. Also, the limitless sky has been used as a sign for embracing one's lover and the "arms" used for hugging has been compared to the fiery rays of the sun.

Fans praise the song, call it 'awesome' and 'gem'

Faasil is not the only reason why this song is making netizens happy. They are also excited to listen to Padma Shri and Padma Bhushan awardee Chithra's voice. While many called the song "awesome," one wrote, "Gem! Real faces...Real humans! Waiting for Malik!!" Another user said, "Mollywood industry very well knows how to show the human emotions in a very simplistic manner." It's true!

Song is treat to ears, eyes and heart; gets 4-stars

The Mahesh Narayanan-directorial premieres on July 15. Alongside Faasil and Sajayan, the action crime-thriller also stars Joju George, Vinay Forrt, Jalaja and Dileesh Pothan. While its trailer showed Malik's gangster and political side, the song Theerame is about his soft side. The track and its song video are a treat to your ears, eyes and heart. Verdict: 4 stars (Song), 3.5 stars (Music Video).