'Hone Laga' review: 'Antim's third song is all about passion 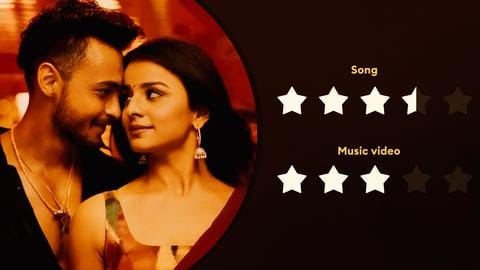 After releasing Bhai Ka Birthday, the makers of Antim have dropped another song titled Hone Laga. The song is picturized on Aayush Sharma, who plays a goon in the film, and his love interest (Mahima Makwana). The track, which is available online, has already fetched a good amount of views. You can watch it on Zee Music's official YouTube Channel. Here's our review.

Jubin Nautiyal's soothing voice is going to mesmerize you

Composed by Ravi Basrur, the song is perfect for a romantic date night. To top that, Jubin Nautiyal's voice makes it a soulful, slow number. It has the signature quality that all of his songs have. Lyrics by Shabbir Ahmed depict a deep meaning, whereas the slow rhythm will stay in your mind. Instruments like guitar, violin, and flute form a perfect blend.

In gist: Track depicts strong passion between Sharma and Makwana

The 3:07-minute-long clip shows love blossoming between the two actors. The use of colorful lanterns in the background gives an aesthetic touch. The innocence in Sharma's eyes and Makwana's boldness make the narrative strong. It seems that the song would take the film's story to another level. Oh, no lip-syncing in this one, only expressions. Umesh Jadhav and Sabina Khan's sensuous choreography is top-notch.

The soft side of Sharma is shown in this track

Since the launch of Antim's trailer, Sharma, whose character's name is Rahulya, was shown as a serious kind of guy. But this song explores his vulnerable side. Both the actors express strongly through their eyes, making it look organic. We assume that the track comes before Salman Khan and Sharma's fight scene. It looks like each frame is taking the story ahead.

Hopefully, the song doesn't slow the pace of the film

Verdict: The song gets 3.5 stars, while the video gets 3 out of 5. Antim is all set to hit the cinema halls on November 26. It will clash with John Abraham's Satyamev Jayate 2, scheduled to release a day earlier. Directed by Mahesh Manjrekar, Antim stars Khan and Sharma in lead roles. The actors are sharing screen space for the first time.

Moto Edge 30 Pro tipped to be launched by April

These MG Motor cars have become costlier in India

5 Bollywood sequels that we are eagerly waiting for

'Antim' and 'Atrangi Re' to be digitally released simultaneously

Want to be Salman Khan's tenant? Shell out Rs. 95K/month!

'Antim' review: Salman Khan's actioner is not worth your time