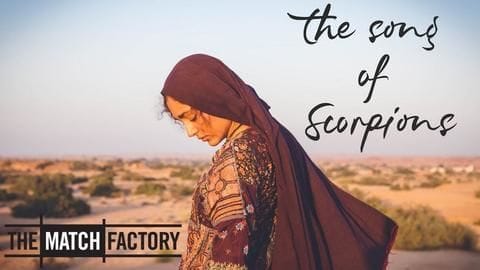 Irrfan Khan will be seen in his final movie titled The Song of Scorpions, which will be released in early 2021. The script is written by Anup Singh, who has also directed the film. It also stars Golshifteh Farahani, Waheeda Rehman, and Shashank Arora. The film is described as having a "story of twisted love, revenge and the redemptive power of a song."

Notably, movie critic Taran Adarsh shared the update on Twitter, divulging information about the brands associated with its production. The film will be presented by Panorama Spotlight and 70mm Talkies. Apart from this information, the tweet also had a video teaser with a mesmerizing soundtrack, showing an extensive sand dune. It eventually showed a still of Irrfan in the movie.

Rajasthan calling
The trailer is ethereal in a deserted landscape

The film revolves around the life of a scorpion-singer named Nooran (Farahani), who learns the tricks of the old trade from her grandmother, Zubeidaa (Rehman). A camel trader named Aadam (Irrfan) falls in love with her. The trailer, lasting 1:41 minutes, gives away the last lure of Irrfan's unavoidable poetic and painful gaze. We will miss him and his presence sorely!

Stigma
Nooran has to learn scorpion-singing, Aadam is mesmerized by her

Nooran hails from a Rajasthani sect of people specializing in scorpion-singing, the art of rendering scorpion venom useless inside the human body by singing to them. She needs to learn the trick from her grandmother but is traumatized after a man violated her. Her beauty grabs the attention of camel trader Aadam, who is well aware of the stigma associated with the practice.

Nooran can't ignore Aadam's charm but is torn between her past and present as she can't find music within her. The trailer shows her running away from her place, but ends with Irrfan's Aadam being resolute about following Nooran across the desert in order to find love and ultimate solace. The film had premiered at 70th Locarno Film Festival, Switzerland, in August 2017.