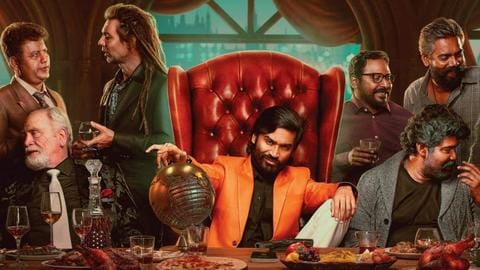 Dhanush is back to enthrall us with Jagame Thandhiram. After a long wait, makers treated his fans by releasing the entire album of the much-awaited flick today, along with a new poster. The music has been given by Santhosh Narayanan, who rarely has failed us, and with tracks like Bujji and Rakita Rakita, this album is a treat to listen to. Here's our review.

Jagame Thandhiram tracks, the ones released, have impressed the masses, but there are some clear winners: a) Rakita Rakita, sung by the superstar himself, has a retro and festive feel. It's about a man who cares for nobody, and lives like a king. b) Bujji comes next. This energetic love song with peppy beats will make you groove, without any effort.

Barotta Master might not appeal to those who don't like EDM beats. The same goes for Naan Dhaan Da Mass, a song that might be too metal-ish for many. There are 11 tracks, and almost all songs are power-packed. This especially goes for Aala Ola and Theengu Thakka. You can listen to all the Tamil tracks here: https://t.co/rOh3wt8lPW?amp=1.

Result
Verdict: Narayanan-Dhanush is the combo we needed; album gets 4/5

In gist, Narayanan has proved his mettle once again with this incredible album, which surely is one of Dhanush's best soundtracks in recent times. There are several songs that will be played in nightclubs for months (if they open), while others will make you miss your loved ones. The music has definitely amplified the hype around the movie. Verdict: 4 out of 5 stars.

Now coming to the new poster, which director Karthik Subbaraj shared on Twitter. It shows guns and firearms pointed at Dhanush's Suruli, who's donning an orange jacket-black shirt, and looks calm and unfazed, while smoking a cigarette. His hand gestures seemingly hint at a dance step. Or, is he turning things around for himself, like the clock behind him? A possible race against time?

The film has Suruli going to London and getting into trouble with Peter, a powerful gangster. While the movie is an action-thriller, it will also focus on racism, cultural shifts, and other subjects. Jagame Thandhiram stars James Cosmo, who has acted in Braveheart and Game of Thrones, along with Joju George and Aishwarya Lekshmi. The movie is set to hit Netflix on June 18.