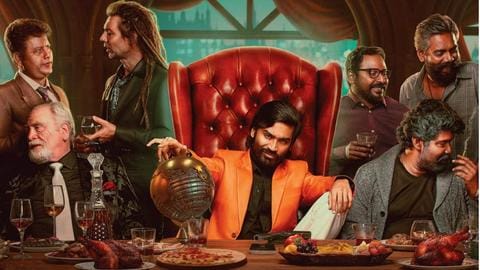 Netflix dropped the trailer for Jagame Thandhiram (which translates to this universe is a ruse) today, and Dhanush as a "Tamil gangster on the streets of London," impresses. Fine cinematography and witty dialogues make up for a quirky and exciting premise. Directed by Karthik Subbaraj in his first collaboration with the Karnan star, the action-thriller has been produced by YNOT Studios and Reliance Entertainment.

The trailer opens with Peter aka James Cosmo of Game of Thrones-fame admonishing someone over the phone, and it looks like they are going to pay for not listening to him. "You and me, we are like brothers," he says, as Madurai-based gangster Suruli (Dhanush) appears onscreen, running with a bomb in his hands. Then we get a lot of demonic laughter and explosions.

Dhanush is a treat to watch, as he is passionate, reckless, and committed to his duties with equal grit and drive. Most of the movie has been shot in London, so we see a lot of foreign actors. Subbaraj might have wanted a universal appeal since the trailer has a lot of F-bombs, and the high immigration rate seems to be a sore point.

Story
'It showcases fight for what you can truly call home'

It revolves around Dhanush, who Cosmo recruits, to prevent the rise of Sivadoss in London's illegal weapons and gold business market. But, soon Suruli picks up a beef with Cosmo, and we'll see how he applies his wicked senses to rule over London. The fundamental theme will be about a "fight for what you can truly call home, seen from perspectives of three characters."

Subbaraj had said he wanted to highlight a "globally prevalent issue through a locally-rooted character in a most interesting and entertaining way." The movie was slated for a theatrical release originally, but producers later decided to go with an OTT release. Dhanush, who was batting for a big-screen launch, was apparently offended by this development, and hence, stopped promoting this venture altogether.