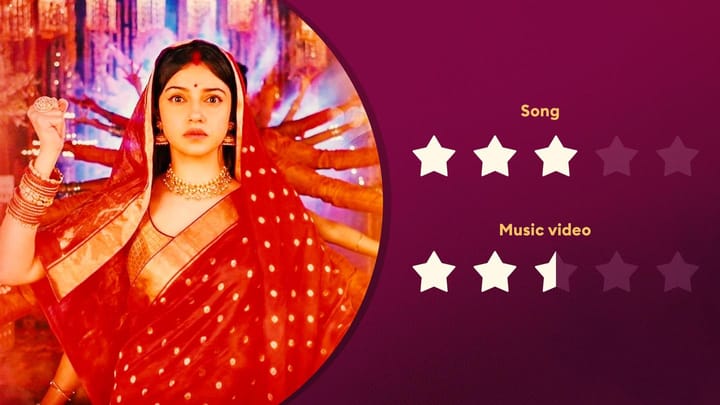 Another track from the upcoming actioner Satyameva Jayate 2 is here! This time, makers have dropped a devotional song that talks praises of the Almighty and her ways of finishing evil in mortals. Titled Maa Sherawali Song, the music video for the number once again features the leads of the film—John Abraham and Divya Khosla Kumar. Here's a review of the music and MV.

Nothing really makes the song memorable

Payal Dev has voiced the majority of this devotional song, alongside composing the music. Sachet Tandon of the famous Sachet-Parampara duo has sung the male part of the track. At nearly four minutes, the song is pretty much a regular Hindi devotional song with lyrics praising the power of the deity. However, there is nothing that stands out in the entire track.

The accompanying music video begins with Khosla Kumar seething in anger as she prophetically announces the arrival of Goddess Durga (understandably to end evil). Then clad in bright red attire, the actress sings the prayer song while Abraham hunts down antagonists, killing them in the most brutal way possible. This involves piercing a police van open and killing two men with a trident.

Hero taking law into his hands is romanticized here again

The message of the song and the film at large gets cleared from the get-go in the MV. Like many mainstream Bollywood movies, here also the protagonist takes law into his own hands to punish culprits, who continue to evade justice through loopholes of society and laws. But romanticizing the "hero" stabbing a man to death in public somewhere gives the wrong message out.

Song is strictly for those who listen to devotional numbers

But director Milap Milan Zaveri has some conflict surrounding this lawlessness weaved into his script, as evident from the trailer. So we will be waiting for the film to drop on November 25. Coming back to the number, if one is into devotional songs, they can add this to their list. Verdict: While the song gets 3/5, the music video bags 2.5/5.