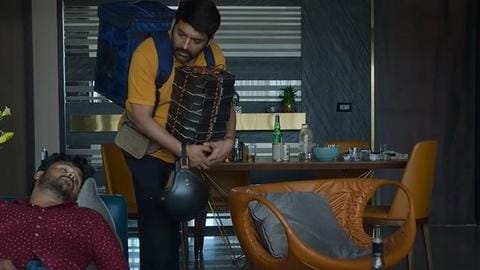 Actor Kapil Sharma shared the trailer of his upcoming film Zwigato on social media recently. Directed by Nandita Das, the upcoming film is produced by Applause Entertainment along with Das. Zwigato's trailer, which was shared by Sharma on Monday, hints that the film will follow the life of a food delivery executive, with Sharma playing the lead role. Read on to know more.

Sharma comes as a hardworking food delivery agent. He has taken up food delivery as a profession after losing his job as a floor manager post-pandemic. He works hard to meet the family's needs by trying to meet his delivery target. Insults and hardships are parts and parcels of his profession. His life takes a turn when his wife takes up a job.

The official synopsis of Zwigato read, "The film is about an ex-floor manager of a factory who loses his job during the pandemic. He then works as a food delivery rider, grappling with the world of ratings and incentives." "To support the income, his homemaker wife begins to explore different work opportunities, with fear but also the excitement of a newfound independence."

Sharing the trailer on Instagram, Sharma wrote, "After the successful world premiere at @tiff_net, Zwigato is all set to win hearts at @busanfilmfest. Here's a sneak peek into the world of Zwigato, check out the International trailer here." Fans and celebrities took to the comments section and showered the team with praises, expressing how excited they were to watch the film.

In the comment section of #Zwigato Trailer, Their are some comments of Delivery boys executives and they are feeling the trailer. Hopefully after this film they will get the Respect which they deserve.Thank you @nanditadas and @ApplauseSocial for making this movie.@KapilSharmaK9 pic.twitter.com/PlpoJGDLIt