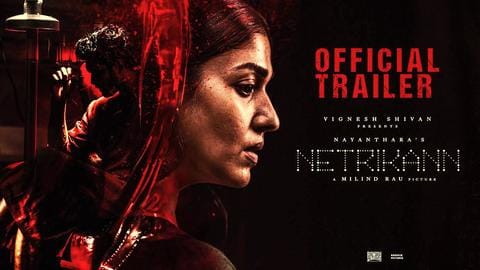 Disney+ Hotstar dropped the trailer for Nayanthara's upcoming thriller Netrikann on Thursday and it immediately managed to grab eyeballs. The two-minute clip started trending on YouTube, even reaching the number one spot in YouTube's "Trending" category yesterday. At the time of writing, the trailer for the Milind Rau-directorial raked in over 28 lakh views on Disney+ Hotstar's YouTube Channel. Here's more on this.

In this article
Trailer

Before discussing anything else, let's break down the trailer. Nayanthara plays Durga, a visually impaired person who comes across a serial killer (played by Ajmal), who has abducted and tortured 12 women. While the killer had managed to evade the police till now, Durga becomes a witness, thus starting a head-on battle with him. The film will tell us who emerges victorious and how.

Trailer still among the top trends two days after release

Gory scenes of bloodshed and torture are abundant, and we can expect a raw and unsettling movie. Also starring Manikandan and Saran in pivotal roles, Netrikann will be premiere on Disney+ Hotstar on August 13. Becoming a rave among the viewers, the trailer topped the Trending list even late Friday. Currently, it is shuffling between the 40th and 41st ranks on the Trending list.

'Netrikann' loosely based on a 2011 South Korean movie 'Blind'

Reportedly based loosely on the 2011 South Korean movie Blind, Netrikann has been produced by filmmaker Vignesh Shivan under the banner of Rowdy Pictures and co-produced by Hyunwoo Thomas Kim and KS Mayilvaganan. Cinematography has been helmed by RD Rajasekar and Girishh Gopalakrishnan is the music composer. Viewers will be able to watch Netrikann in four languages: Tamil, Telugu, Kannada, and Malayalam.

Releasing in Independence Day week, 'Netrikann' to have tough competition

After being deprived of original theatrical release, Netrikann will now premiere during Independence Day week. Big Bollywood releases, Ajay Devgn's Bhuj: The Pride of India and Sidharth Malhotra-starrer Shershaah, are both dropping digitally the same week. The Nayanthara-starrer will provide a different flavor from the patriotic movies. Separately, monstrous hit Godzilla vs. Kong is coming to Amazon Prime Video also on August 14.