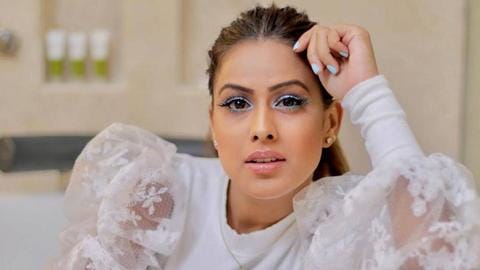 Saregama Music has released a new track today on its official YouTube channel. Titled Phoonk Le, the song features popular TV actress Nia Sharma. Though her dances moves are good, the audio fails to impress. After watching its video, you will feel Phoonk Le is a mix of several other Bollywood party songs. In gist, it's a pretty typical offering. Nonetheless, here's our review.

Sharma succeeds in getting into the character of Bijlee

The 3:30-minute-long clip begins with Sharma's entry with a display that reads, "Bijlee Parfarmance Aaj Nite." She makes the best use of her waist-hip moves and wins over the crowd, who mostly look like truck drivers. She dances on a milk container carrier, rickshaw, and khatiya throughout the song. The imagery of men showering money on a woman dancer should stop in the mainstream media.

'Rehearsed day and night as I'm not a professional dancer'

While talking to IANS, the Ek Hazaaron Mein Meri Behna Hai actress said, "I never knew I'd be the one getting an item number like Phoonk Le. I was killing myself thinking how I'd even pull it off, I rehearsed day and night as I am not a professional dancer." She went to "extreme levels" for the song, like "working out and eating less."

Track looks like a tribute to Bollywood's previous item numbers

Sharma's effort actually shows and though the audio hardly has any recall value, you might want to watch the video for her. Phoonk Le would remind you of previous item numbers like Munni, Fevicol Se, etc. Verdict: Song and MV get 2.5 and 3.5/5 stars, respectively (Gandhi's voice, Sharma's dancing skills, and Prince Gupta's choreography are the reasons, though the video's concept is trashy).

#BirthAnniversary: Celebrating Sushant Singh Rajput, who talked through his T-shirts

Vivo Y75 5G to debut by the end of January

OPPO Reno7 series will be launched in India soon

'Hello' review: Fans of Govinda, steer clear of this!