'The Conversion' trailer: Love jihad, torturous in-laws and an activist 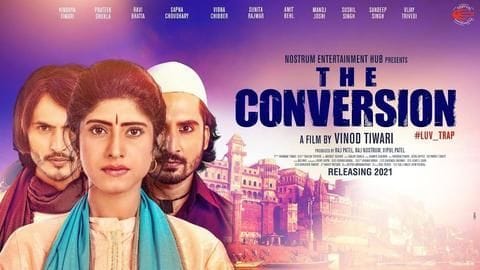 The trailer of Vinod Tiwari-directorial The Conversion got released recently. Starring Vindhya Tiwari, Prateek Shukla and Ravi Bhatia, it focuses on the concept of Love Jihad, where a Muslim boy marries a Hindu girl by force. Set in Benaras (Uttar Pradesh), this movie also deals with a love triangle. Presented by Nostrum Entertainment Hub, the story has been written by Vandana Tiwari.

About
Movie: A protest against conversion of Hindu girls

Tiwari (Hindu) falls in love with Shukla (a Muslim boy). The third wheel is Bhatia, who belongs to Tiwari's religion and loves her. But the actress chooses to marry Shukla by going against her family and then she is seen treated miserably by her in-laws. She then runs away from her husband's home and becomes an activist protesting against the conversion of Hindu girls.

Talking about the actors' performances, their expressions, dialogue delivery and body language are not impressive at all. Even the music and cinematography doesn't look appealing. It deals with a sensitive subject, which has not been handled with maturity or panache. Meanwhile, the trailer video on YouTube has already crossed 16 lakh views within a day, and received 14K likes.

The makers of The Conversion have also roped in actor Manoj Joshi, who plays Tiwari's father. Dancer and former Bigg Boss contestant Sapna Choudhary also appeared in the trailer in a song scene. Stating the film is "not a simple love triangle," the director earlier said, "It's a film that sensitively explores the dilemma of religious conversions that happen during love marriages in India."

Boycott
Netizens had wanted to boycott this film last month

A section of netizens, aware or unaware of the real reason, had started a trend last month — #BoycottTheConversionMovie. It was because of the movie's poster, which featured Tiwari donning the get-up of a Hindu in one half, and the other half in a burkha. This triggered some online users who claimed that this image "sends a wrong image about our community."