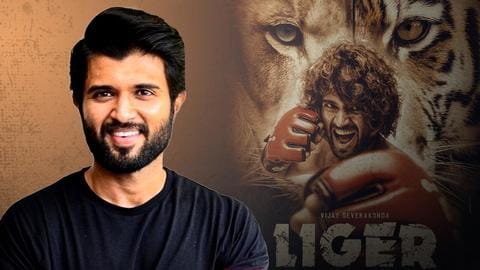 It's here! After much hype, the trailer of Ananya Panday and Vijay Deverakonda starrer Liger is out. The Puri Jagannadh directorial was first announced in August 2019 and will mark Deverakonda's return to celluloid after more than two years. Liger is bankrolled by Charmme Kaur, Jagannadh, Apoorva Mehta, and Karan Johar (Dharma Productions). The film is heading toward a theatrical release on August 25.

Context
Why does this story matter?
Trailer
Deverakonda's hardwork bears fruit in form of chiseled body

The trailer, slightly over two minutes, establishes Deverakonda's character as a "crossbreed" between a tiger and a lion. In this author-backed role, he also receives ample space to flex his abs and highlight his chiseled body and looks particularly promising in scenes inside the boxing ring. It's also noteworthy how Liger hasn't shied from showcasing its protagonist with a stutter—a praiseworthy effort toward inclusion.

While Deverakonda looks terrific in the high-octane actioner, sadly, Ananya Panday seems to be an eye-candy sans any meat. Hopefully, that won't be the case in the film. Ramya Krishnan, the titular hero's mother, goes all out as an actor yet again and impresses despite featuring in only a few scenes. Tyson appears only briefly but his presence elevates the trailer several notches higher.

Information
Everything you need to know about 'Liger'

Liger is eyeing a pan-India audience and will release in Hindi, Telugu, Malayalam, Kannada, and Tamil. While it will mark Deverakonda's Hindi debut, it is also set to be Panday's first time in Telugu cinema. Several other noted actors will be seen in the film, including Makarand Deshpande and Ronit Roy. The film has been written by Jagannadh, AR Sreedhar, and Kiran Thatavarthi.