#ThatWas2018: From toilet-paper to denying climate-change, Trump was the newsmaker

US President Donald Trump is known for his unintentional funny antics. He also doesn't shy away from expressing his opinions, and has often been slammed for his offensive and sometimes nonsensical statements. However, those statements are pretty amusing, and we've enjoyed his antics with a hearty laugh. Let's take a look at some of his bizarre, funny moments of 2018.

#1
When a toilet-paper stuck to Trump's shoe grabbed eyeballs

In October, when Trump was boarding the Air Force One at the Minneapolis-Saint Paul International Airport, a toilet paper, which was stuck to his shoe, caught everybody's attention. As the President climbed the stairs, the paper kept bellowing as he took each step. All along oblivious, he also turned around and waved goodbye. The paper finally got dislodged as he entered the cabin. Oops!

WATCH: President Trump boards Air Force One with what appears to be toilet paper stuck to his shoe pic.twitter.com/A0AEYXXlXq

#2
The one where Trump forgot Diwali is festival of Hindus

Trump loves Hindus. He made it clear with his 'Ab Ki Baar Trump Sarkar' slogan. However, he made a serious gaffe when he forgot to wish Hindus in his Diwali celebration tweet. In the tweet, Trump mentioned Diwali is a major festival of Buddhists, Sikhs, and Jains, but mistakenly excluded Hindus. By the time he corrected his tweet, social media was already on fire.

Trump's Twitter account posted a Diwali tweet that didn't mention Hindus, then deleted it, then... reposted it again with a different link but still no Hindus? pic.twitter.com/6zRqLzOA0r 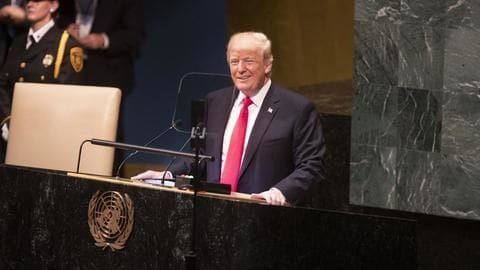 In September, Trump at the UN General Assembly accused China of meddling in the 2016 US Congress elections. Hearing that, China's foreign minister shrugged and denied the claims. Later, at the same meeting he boasted that "his administration has accomplished more than almost any in the US-history." On this, Trump received an unexpected laugh from the crowd, who was clearly amused by his bragging.

#4
When Trump claimed his 'nuclear button' was bigger than Kim's

Before Trump and North Korean leader Kim Jong-un signed the historic agreement of denuclearization of N-Korea in June, the two leaders were locking horns over their nuclear powers. In January, Trump tweeted that his "Nuclear button is much bigger and more powerful" than Kim's and that his "button works". Trump's choice of words was clearly pretty extreme, and some critics found it childish.

North Korean Leader Kim Jong Un just stated that the “Nuclear Button is on his desk at all times.” Will someone from his depleted and food starved regime please inform him that I too have a Nuclear Button, but it is a much bigger more powerful one than his, and my Button works!

#5
Flouting royal protocol, Trump showed his back to the Queen

The US President is often unaware whenever he is making a faux pas, like he did with Queen Elizabeth II. In July, when the two were strolling around the grounds of Windsor Castle, Trump, at one point, walked ahead of the Queen, facing his back to her. Notably, it's considered rude to show your back to the Queen. The Queen literally disappeared behind him.

Britain’s Queen Elizabeth walks around US President Donald Trump as they inspect the guard at Windsor Castle pic.twitter.com/2DWfIlTeMT

#6
Trump's denial of climate change has 'earned' him a name

And who doesn't know about Trump's belief that Global warming has been created by the Chinese to make US-manufacturing non-competitive. In November, he also quashed a study, warning of catastrophic impact of climate change, produced by his administration that involved over 300 climate scientists. 'Acknowledging' his denial, a newly discovered worm-like amphibian that buries its head in the sand was officially named Dermophis donaldtrumpi.