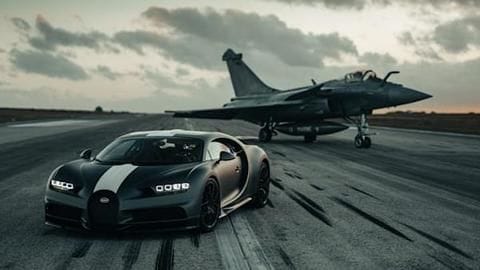 It is not every day that one gets to describe a drag race as a David v/s Goliath event. Well, that is exactly what happened when a Bugatti Chiron Pur Sport hypercar took on Dassault Rafale fighter jet in an extraordinary drag race. Bugatti has shared pictures and a video of the contest that occurred at Dassault's headquarters in France.

Apples vs Oranges
First, how do the rivals fare on paper?

Bugatti's challenger was a limited-run Chiron Pur Sport with an 8.0-liter W16 engine that makes 1,500hp/1,600Nm. Competing the hypercar was the French Navy's Dassault Rafale whose two turbojets generate a mind-numbing 58,550 newtons of thrust (roughly 5,727hp). The four-wheeler has a top-speed of 490km/h - the fastest for any road-legal car - but rather paltry compared to Rafale's best of 1.8 Mach (over 2,200km/h).

With the drag race's commencement, the Chiron Pur Sport took the lead. Foot to the ground, the hypercar accelerated and went from 0-100km/h in just 2.4 seconds and then reached 200km/h in merely 6.1 seconds. In a little over 13 seconds, the four-wheeler managed to hit 300km/h and soon touched the 400km/h mark in around 30 seconds.

Flying colors
Chiron was humbled by Rafale after 450 meters

The Rafale fighter jet was in a league of its own. After 150 meters, the airplane reached a speed of 165km/h but it stayed behind the hypercar. After reaching the 350-meter mark on the runway, the rumbling jet increased its speed to 210km/h. Finally, after 450 meters, it took off at a ground speed of approximately 260km/h, leaving the Chiron on the tarmac.

Quote
'It was an incredible and fantastic spectacle'

The driver of the Bugatti, Pierre-Henri Raphanel said, "I moved away from the Rafale for the first few hundred meters but after a few hundred more meters, he was about 20 meters above and next to me in the tunes. An incredible and fantastic spectacle."