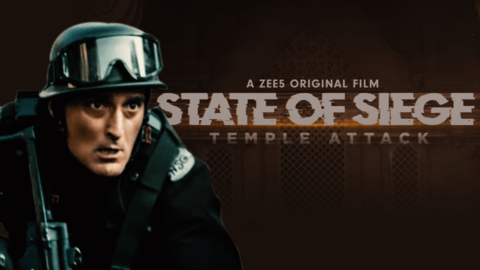 The teaser of Akshaye Khanna-starrer State of Siege: Temple Attack has been released and it's bone-chilling. Khanna, who is set to make his OTT debut with this ZEE5 movie, will be seen as a National Security Guard (NSG) commando. And the story is based on the 2002 terror attack at Akshardham Temple (Gujarat). The Ken Ghosh-directorial is slated to premiere on July 9.

Details
Teaser is full of suspense, thrill and action

Beginning with a voice of a terrorist, the teaser shows the Akshardham temple under terrorist attack and NSG commandos planning for a rescue mission. As soon as the terrorists enter the temple, they start to open fire, keeping several devotees as hostages. "NSG must engage," with this dialogue of Khanna, the rescue operation begins. This thrilling teaser is full of action, suspense and drama.

It also stars Vivek Dahiya, who appeared in the State of Siege: 26/11 web series (the first project of this franchise), along with Gautam Rode. This movie has Khanna as the lead, who has made fans happy by being in uniform again. Remember him from the 1997 cult classic, Border? He looked charming as a young army guy and now, as an NSG commando.

Quote
''State of Siege: Temple Attack' is not just a film'

The teaser hinted that the movie, produced by Abhimanyu Singh's Contiloe Pictures, will show the bravery of NSG commandos who fought the terrorists. Talking about the film, Ghosh said in a statement, "State of Siege: Temple Attack is not just a film. It is a tribute to the NSG commandos of India who are always ready to risk their lives to protect us."

To recall, Gandhinagar Akshardham Temple in Gujarat was attacked by terrorists on September 24, 2002. Around 32 people were killed while more than 80 were injured. As per reports, the NSG commandos had eliminated two terrorists who carried out the attacks. Coming back to the film, fans have high expectations from it after State of Siege: 26/11 web series had won hearts and acclaim.