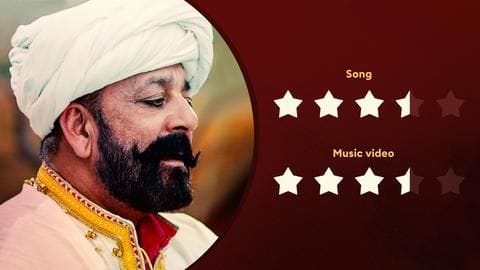 T-Series has dropped a groovy number, Bhai Bhai, from the upcoming war film, Bhuj: The Pride of India. Featuring Sanjay Dutt, the song got released today to mark his 62nd birthday, as the actor plays a pivotal role in the movie. Mika Singh has lent his voice to the number, which is composed by Lijo George and Dj Chetas. Here's our review.

About
It might be Dutt's introductory song in the movie

Video begins with Dutt praying — "Jis din ladai jeetunga, uss din pagdi pehnunga" (the day the war is won, I'll wear the turban). Then, he is seen pointing his gun toward the enemy with his group. The next shot shifts to him in a Gujarati attire showing dance moves. At first glance, the clip indicates how Dutt's character might be introduced.

Performance
Dutt has nailed it with his expressions, his eyes talked

Among hundreds of talented background dancers, Sanju Baba tries his best to match his moves with the rhythm of the song. And he looks adorable while attempting some dance patterns with his fingers. Dutt brings energy to the peppy number, and nails it with his expression— his eyes deliver both fierce and fun looks in the video. He's also seen showing his fighting skills.

Written by Manoj Muntashir, the song talks about how scary Dutt's character is, comparing him with a tiger, and asking the enemy to run away. "Hindustan mahaan hai, mahaan rahega, ek din Pakistan bhi Jai Hind kahega"— this line, in the end, has been lauded by netizens. While all seems fine, Singh's voice doesn't bring in any extraordinary touch. It has the usual modulation.

Verdict
Dutt adds life to the song and video, gets 3.5-stars

Bhai Bhai is the third song released by the makers. This one is fun to watch and listen to, and if you are a Singh fan, then you might love it. However, the winner is Dutt's towering personality and his expressions. Honestly, he adds life to the song. Verdict: 3.5 stars each (Song and MV). To note, Bhuj will release on August 13.